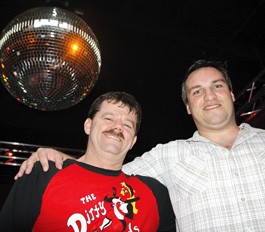 With such a variegated scope, it could be just what Santa Rosa’s been lacking. But will all these elements get along for the sake of a new, promising live music opportunity?

“Whatever we do, there’s a certain percentage of people that aren’t gonna like it,” says Messmer, who, with Cutting, opened Chrome Lotus last week. “You can never, ever be 100 percent. So if we’re 51 percent, then we’re doing good. And even if we’re 49 percent, as long as they’re talking about it.”

When Messmer bought the Round Robin in 2006, he talked about transforming Santa Rosa’s famed dive bar into an edgy, sexy, biker chic joint with hot young beer slingers dancing on the bar. It never came fully to fruition, but that Coyote Ugly&–like atmosphere permeates the front bar at Chrome Lotus. Cleavage galore: check. Jukebox playing AC/DC: check. Drinks with names like “Smack My Beach Up,” the “Dirty Sanchez Margarita” and the “Lotus Spreader”: check.

“You know, we just wanted something fun,” Messmer says of the cocktail’s names. “We wanted this place to not be just another bar. Assuming people come in for a bachelorette party, or it’s your birthday or a special celebration, you want to do stupid little gimmicks like that.”

Tucked away from all this down a long hallway in the back is an incredible music room, a brick-walled hamlet that’s like walking into a different world than the front area. A separate bar serves a laid-back crowd in front of a modest two-foot-tall stage. A disco ball hangs in the center. The room is just the right size—breathable and roomy, but still intimate—and even with just 100 people there, the place is nicely packed.

Patrick Malone, local tastemaker who’s done an excellent job booking the Hopmonk Tavern in Sebastopol, is on board to bring in both local and touring bands. (Messmer calls him “a ninja.”) But don’t expect the reggae-jam-band-folk-soul-bluegrass lineup that’s done so well at Hopmonk. Chrome Lotus will focus on “rock, metal, punk, indie and emo,” says Malone, who’s hired an assistant to handle the extra load and help book bands with few other local options.

There’s also the Thursday-night live music sponsored by Country 106.3-FM, a radio station that plays classic Johnny Cash, Loretta Lynn, George Jones and Merle Haggard. Live country music simply hasn’t had a nightclub home base in Santa Rosa for years, and realistically—whether or not one wants to admit it—it’s one of the most popular genres in Sonoma County.

While this is a boon, Chrome Lotus’ ban on hip-hop will disappoint the area’s legions of rap fans. To Messmer, it’s a business compromise that unfortunately makes sense. In the Santa Rosa Police Department’s eye, hip-hop is basically one big semiautomatic-gang-war cocaine-sex-fest rap battle, and Messmer isn’t willing to take the chance of being targeted for shutdown by the city attorney’s office for hosting it.

“I think hip-hop equals problems,” says Messmer, adding that he’s aware of and will support more positive, conscious hip-hop artists. “But I’m not into that tough-guy image, smackin’-my-bitch-up. I’m not doing that. I don’t want that, I don’t want those people in here, and I don’t think they’re going to like this place anyway.”

Fancier features of Chrome Lotus seem grafted from the “ultralounge” aesthetic, held over from Messmer’s short-lived founding interest in the former swank downtown hotspot Seven. Two reserved box booths with bottle service hug the walls in the music room. A private room straddling the patio and music area is planned. A coat check greets all entrants before giving way to a bar with plenty of illuminated top-shelf liquor. A trained security team with earpieces checks the guest list at the ropes on the sidewalk and pats down pockets before entry.

Finally, there’s the basic watering-hole aspect. Pool tables and corner couches fill a triangular room behind the bar. A soon-to-open pizza spot next door will serve up plenty of pepperoni and cheese for late-night hunger pangs. Sunday features $2 beer deals, and a “Rough Days Happen” special offers 25 cent PBRs to those who bring in a recent divorce certificate, foreclosure document, pink slip or bankruptcy notice. A covered, ventilated outdoor patio that will allow smoking is set for completion soon.

Why Chrome Lotus’ crazy fusion of nightlife mashup works is that the layout is expansive enough to accommodate all stripes without forcibly criss-crossing them. Music fans in the back don’t need to tune out catcalls from the meat-market crowd. Pool players don’t have to navigate their cue sticks around bleach-blonde Jersey Shore girls. Real estate agents catching the Warriors game after work don’t have to do so with a metal band five feet away.

The main thing that everyone can get behind? Already, a handful of local music nights will boast just a $1 door charge. “Our goal is to bring affordable live music to this side of the railroad tracks,” Messmer says. “If you haven’t noticed, the economy’s crap, and I’d rather people be able to come and listen to a good band. They’re gonna spend money at the bar either way. I’d rather have them keep their $10 in their pocket and buy a few drinks and listen to some good music.”

July 10: Napa Valley Battle of the Bands at Rutherford Grange