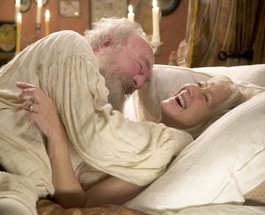 One seeks the truth; one cherishes idealism. And yet truth and idealism make uncomfortable bedfellows. The problem of Leo Tolstoy’s end is scoped out in Michael Hoffman’s Last Station, based on Jay Parini’s 1990 novel. Nominated for two Oscars for supporting actor and lead actress, Station is an interesting, very well cast, visually pleasant yet strangely toneless film about two sets of lovers who find idealism coming between them.

Circa 1910 in Moscow, Valentin (James McAvoy, once again playing a callow young person out of his depth) is recruited by one Vladimir Chertkov (Paul Giamatti). Chertkov is the head of the Tolstoy society, dedicated to carrying out the author’s reformist ideas regarding celibacy and manual labor. Valentin’s job will be to live on Tolstoy’s commune, carry a notebook and record the great man’s thoughts.

Tolstoy (Christopher Plummer), the most famous writer on earth, is enjoying a sort of Indian summer, watching his small farm bloom and receiving the adulation of the world. But the count’s countess—Sofya, his wife of nearly 50 years, played by Helen Mirren—has tired of her husband’s utopian politics. And as the mother of more than a dozen children, she is terrified by the old man’s desire to give all of his possessions away.

Chertkov, very much the curly-mustached, perfumed parlor snake, is engineering a deal to put War and Peace in the public domain so that the suffering world may have it for free. Meanwhile, Valentin’s desire to stay pure and virginal is sorely tested by a saucy, experienced woman on the commune, Masha (Kerry Condon).

Outfitted with the requisite beard, Plummer plays Tolstoy with the gusto of a ham-loving actor tackling Fiddler on the Roof. Plummer has a particularly moving scene describing his long-ago courtship with his wife, and there are juicy scenes of the old couple going after one another in bed and out of bed. But what wife can bear hearing her husband described as a saint, a new Jesus? Cameramen—paparazzi, before there was such a thing—watch the spatting between the Tolstoys and record it all for posterity.

This view of Tolstoy, emphasizing the naive sweetness and the common-man heartiness, produces affection but doesn’t fathom the deeper meanings of this story. Hearing of Tolstoy’s renunciation and its consequences, one thinks of Lear. And one wouldn’t be the first, either: George Orwell wrote a famous essay comparing Tolstoy’s hatred of King Lear to Tolstoy’s Lear-like folly in divesting himself of his property before he actually died.

Orwell’s point—that some forms of sacrifice disguise a covert power play—eludes Hoffman. He gives us Tolstoy as a cracked, principled old grandfather, manipulated by outsiders. We also don’t get any sense of why a sensitive man would want his hands clean in the Russia of the day. We hear that the filthy peasants are out there being filthy, but we don’t see them in their muck or understand who buried them there. The Last Station’s charming greenery and white birches could be ornamenting some exceptionally gilded-by-hindsight memoir: speak, memory, maybe.