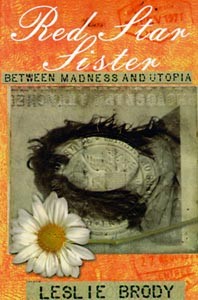 The story of the 1960s has been told so many times, in so many ways, that it has attained the cultural status of a fairy tale. Whatever the ideological stance or literary talent of the teller, the tale tends to be full of the same fantastic clichés: Either Richard Nixon or Abbie Hoffman winds up wearing the black pointy hat, commanding squads of nasty flying monkeys (with the face of Henry Kissinger), and cackling “I’ll get you, my pretty.” History flattens out like a pancake, and whatever insights (political, historical, or literary) the period has to offer are buried in simple-minded moralism and grotesque self-indulgence.

Leslie Brody’s autobiographical account of coming of age in the vanguard of the ’60s counterculture covers a lot of ground: Brody was a high school anti-war activist in suburban Long Island, underwent paramilitary training with the radical White Panther Party (where she earned the moniker “Red Star Sister”), got her head bashed in by San Francisco cops, forged a name for herself as an alternative journalist, and journeyed to the Paris Peace Talks in a quixotic effort to end the war by meeting with the Vietnamese diplomatic delegation. Along the way, she even managed to find time to attend Woodstock.

Early on in this ambitious account, the author serves notice that she has no plans to handle her youthful self with kid gloves: “‘Perhaps it was instructive that my goals were not unsimilar to those of a Miss America contestant whose sappy calls for ‘world peace’ were an embarrassing annual cliché. Miss America wanna-bes could smile thousand-watt smiles, but they were fuzzy on how to achieve peace for humanity. I suffered no such doubts.”

On the other hand, she’s not apologizing either. Her mistakes and misadventures are legion as she hopscotches across the country carrying her red suitcase and negotiating the cultural minefield of the turbulent decade. She joins a radical Ann Arbor commune and gets a bitter taste of conformity and group-think. She experiences firsthand the machismo and paranoia that were the toxic bproducts of the long war between U.S. leftist paramilitaries and the FBI.

But she never finds a good reason to endorse the conservative condemnation of her generation: “I’m sure brats abounded, as they do in every age. They disturb people with new scientific and political theories, compose symphonies, and write poetry of staggering beauty and vision. I admit brats can be annoying, but I’d always rather be on their side.”

The book renders many of Brody’s experiences in wonderfully vivid terms. Her account of participating in an anti-war demonstration and being beaten to a pulp by the police is hair-raising and provocative. The claustrophobia of her classrooms on Long Island is also conveyed with subtle power: The independent-minded little Jewish girl was rarely out of trouble with disapproving WASPy teachers determined to hold back the ethnic tide. Brody’s relationship with her widowed father is also portrayed with thoughtful complexity.

Unfortunately, in other cases, the reader is left hanging, waiting for a denouement or explanation that never comes. Brody took LSD and lost her virginity while experiencing Woodstock, all in one fell swoop. Perhaps the whole thing was simply too intense to fully convey, but the author seems not even to try, content instead to sum up in a few flat details. In this, and a few other cases, her account is curiously lacking a climax, leaving us wondering what the hell really happened.

On the whole, however, Red Star Sister takes care to keep the reader involved and interested in Brody’s tumultuous quest to find a good place to make her stand as an activist, poet, and free-thinker. Particularly compelling is the author’s slow evolution as a feminist in the very male world of the revolutionary counterculture. Brody is far from a knee-jerk male-basher, but her deft account of the prevailing sexism still at work at the dawn of modern feminism is priceless (and often very funny).

In the end, Brody–who now teaches at California’s University of the Redwoods–leaves us with an intriguing, if incomplete, view of a fascinating period. With Red Star Sister, she has opened up her red suitcase of mementos just wide enough to give us a glimpse of a life lived with relentless determination, a good dose of foolhardiness, and a deep thirst for real meaning.

Web extra to the December 10-16, 1998 issue of the Sonoma County Independent.