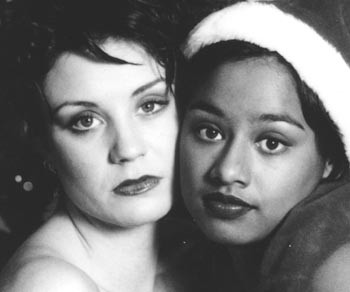 SURE, it might be called the Lesbian Film Festival, but the producer of the event wants to emphasize that you don’t actually have to be gay to attend or enjoy the films on offer. “While the audience might be 95 percent gay or lesbian, we don’t discriminate against straight people,” Jodi Selene says.

“And we certainly don’t ask people about [their orientation] when they walk in,” she adds with a laugh.

Before the event changed venues (it was held last year at the Raven Theater in Healdsburg), gay and lesbian films were usually shown together. But this year, Selene–who previews 40 to 50 films every year to make her selections–says she had trouble finding men’s films strong enough to make the cut.

“I’m looking for well-done and interesting films that have something to do with the gay lifestyle,” Selene explains. “I did screen a number of men’s short films this year and just didn’t find any that were really good. This is the first time I’ve found fewer men’s films of quality than women’s films.”

Selene decided to move to the more centrally located Rialto because the theater–which “was very open to having a lesbian film festival”–already has a gay audience for its own male showcase, called Face To Face.

She says the increasing mainstream nature of gay films, and the increase in gay film festivals in general, has had little impact on her Sonoma County event. Also, because of budget concerns, she is limited to what she can afford to rent.

“My festival is not affected much by what’s being done in the City,” Selene says, “because I don’t do full-length features–I only screen shorts.”

Snailfingers (video) and Switch (video), by Canadian filmmakers Alina Martiros and Hope Thompson, respectively, have the longest running time at just over 20 minutes. Life’s a Butch (video) by Rosser Goodman of California lasts 15 minutes, while Home for Christmas (35mm) by Frank Mosvold and Lullaby (video) by Antonia Kao get it done in just over five minutes. Mosvold, a native of Norway, is the only gay male director to be included in this year’s festival.

While all the films have lesbian themes, the story lines range from gay coming-of-age tales to ’40s-style gangster flicks. Over the previous six years the Sonoma County Gay and Lesbian Film Festival has screened many great films coming out of the UCLA film school. This year the tradition continues with the beautiful feminist creation story Lullaby.

The Sonoma County Lesbian Film Festival was first held in 1995 and immediately found an audience. In 1996 it was expanded to include gay men’s films–but reverted to its original format in 1997 when Selene went back to grad school at SSU. There she found herself producing the event on a limited budget.

“Sonoma County has a large population of gays and lesbians,” she says. “It’s important for us to see people and relationships we can relate to on the screen. This has always been a fun event to put on. I like the fact that it brings the community together for an evening of entertainment.”

Next Article‘Angels in America, Part Two’