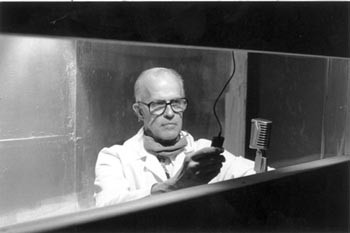 Lesbian and Gay Film Festival offers quick flicks for everyone

JODI SELENE made the mistake of stepping out of the theater with the projectors still rolling. It was the second year of the annual lesbian and gay film festival, and the event’s founder couldn’t afford to pre-screen the short films before the moviegoers at Healdsburg’s Raven Theater saw them. When she returned to the theater moments later, most spectators were hissing angrily.

“Turns out there was a scene where one woman raped another,” recalls Selene. “Everybody left the theater talking about it. I just wanted to put a paper bag over my head.”

Selene, who withstood a barrage of criticism, did have one supporter.

“A woman from Europe came up to me and said, ‘I thought it was a good film. She died in the end. American women are so PC.’ ” Selene says with a laugh. “So I tried to hang on to that as I was receiving all these complaints.”

Pick your films carefully: It’s a lesson Selene has learned well in her years of programming what may be the country’s only gay and lesbian short film festival.

“You walk a fine line in Sonoma County,” she admits.

Of course, as Selene puts the finishing touches on the upcoming fifth annual Lesbian and Gay Film Festival–held this year on Saturday, Dec. 4–she admits Sonoma County has come a long way. Besides her own Harmony Network, which is the official producer, grassroots sponsors like We the People, the local gay newspaper, have come on board this year. In addition, she’s gotten unexpected help from the Clois du Bois Winery and Healdsburg Arts Council. While Selene’s friends still might take tickets at the door, community members have begun to rally around the fledgling festival.

That progress is great news to director Carl Pfirman, who is coming up to the festival to watch the screening of his film Boy Next Door.

“I think that it would be much harder to find an appreciative audience without the gay and lesbian film festivals,” he says.

The L.A.-based Pfirman should know. Boy Next Door–a dark teen comedy about sibling rivalry–has screened at nearly 60 film festivals (including Budapest, Tokyo, and London) and won awards at eight of them. It was even shown as an in-flight movie on Northwest Airlines last summer.

But he still wants to meet the people. In that, he’s not alone: Audiences seem to want to meet filmmakers too, which is why this year Selene is holding a pre-festival fundraising event that will feature an as-yet-unconfirmed lineup of filmmakers talking about their work. Selene hopes to raise enough to start a film-completion fund for filmmakers, particularly women, who can’t get enough money to finish their projects.

“I think people really want to talk with filmmakers about the process,” Selene says.

Twenty-something filmmakers Erin Greenwell and Samantha Farinella–makers of Somewhere Along the Way, a film set in a ’50s-era factory town at the height of the red scare–are hoping the exposure in Sonoma will help their own guerrilla fundraising efforts. They’ve already cobbled together $20,000, a 10th of their goal, by involving gay-friendly businesses and lesbian entertainers.

“Who owns the movie?” asks Greenwell. “Not some fickle producer who can yank funding at any time. The community owns it!”

“Any lesbian piece is political because it levels the playing field of what is acceptable in mainstream media,” Greenwell says urgently. “A reality of this time was that there are alcoholism, racism, domestic abuse, unemployment, etc. Why expose something ugly about the community? We don’t want to sanitize the time.”

Pfirman, whose film boasts a Power Ranger (actor Danny Slavin) among his cast agrees with Greenwell that gay films are inherently political.

“The film is political in the sense that it attempts to equalize the struggles of a heterosexual teenager and a gay teenager,” he says. “It’s perfectly normal to grow up gay and to want the same things that straight kids do. I am encouraging gay teenagers to stop seeing themselves as freaks and to fight for what they really want. I hope that older audiences are able look back and laugh at their own excruciatingly painful adolescent experiences.”

SELENE ADMITS she’s taken risks on films this year.”One of the films, Kore Cara Mia, is about S&M and safer sex and . . . a woman [with] AIDS,” she says. “You’re never gonna see that in the movie houses. I thought it was a very creatively made film.”

But viewers looking for merely sex and politics may be disappointed. While some films explore weighty subjects, such as religion (Absolution of Anthony) and racism (Yellow Fever), a vast majority are slice-of- life vignettes.

“My film is in no way political,” says filmmaker Steve Salinaro.

A 41-year-old off-Broadway actor turned filmmaker, Salinaro calls The Rinse Cycle–the story of a man who dyes his hair for the first time and finds the results are more in his head than on it–“purely a sociological study of ageism in Chelsea.”

Despite a new distribution deal from Forefront Films, Salinaro is quick to admit, “I don’t believe my films would be seen if it weren’t for the gay festivals.”

The fifth annual Lesbian and Gay Film Festival will be held Saturday, Dec. 4, at The Raven Theater, 415 Center St., Healdsburg. Women’s films begin at 6:30 p.m.; men’s at 8:30 p.m. Tickets are $7 at the door and $6 in advance (from Milk and Honey in Sebastopol, Community Market in Santa Rosa, and Levin & Co. in Healdsburg) and include all 12 films. A pre-festival fundraiser will be held on Dec. 4 at 5 p.m. at a private home in Healdsburg. Admission to the fundraiser is $15-$20 (sliding scale; proceeds benefit indie filmmakers). For details, call 823-9377.