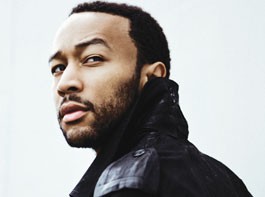 Legend in the Making

When singer-songwriter John Legend burst onto the R&B scene in 2004, his confidence was striking, in everything from his music to his surname. And in just a few short years, he’s lived up to that name with endless awards, acclaimed albums and projects with the likes of Kanye West, Lauryn Hill, Al Green and even the late Michael Jackson. His latest album, Evolver, shows the Ohio native diversifying his palette to include reggae and folk rock, along with his signature soul grooves.

“I see being a musician as the right, and opportunity, to be experimental and explore, and this album was an experiment of sorts,” says Legend, who performs at the Wells Fargo Center on July 31. “It took me back to my roots musically, with a lot of soul-flavored, gospel-flavored reggae, funk and hip-hop kind of all mixed together.”

Legend has also been increasingly visible on the activism scene, playing benefits for New Orleans and Haiti, hobnobbing with Cornel West on Real Time with Bill Maher, and helming the Show Me Campaign, his nonprofit focusing directly on stopping the cycle of poverty. While certainly unique in today’s R&B/soul scene, the 31-year-old’s thoughtfulness is not that surprising.

“I grew up in a house that encouraged me to read,” he says of his home-schooled upbringing, which saw him graduating salutatorian from high school at age 16. “We read a lot of history and whatever was going on, so I was always aware and I really had the desire.”

His two loves are combined in the upcoming album Wake Up!, a highly anticipated collaboration with hip-hop band the Roots inspired by Obama’s 2008 presidential campaign. The record, slated for a September release, is a collection of ’60s and ’70s soul covers whose themes of awareness and activism still ring true. “I think the music and the lyrics on this album retain their relevance, back when Bush was in office, and they’re still relevant now,” Legend says.

The intense buzz seems well warranted judging from the group’s version of “Our Generation,” an obscure Ernie Hines song. Within a loose and funky arrangement by the Roots, Legend croons potent words of unification and enlightenment. “Our leaders make us fight, we don’t know what for,” he sings. “If they want people killed, then let them fight the war.”

“This album really isn’t about an election. It’s about the condition of the world and this country,” Legend says. “Even though we’ve seen a lot of positive changes on the policy front, there’s still 10 percent unemployment, two wars going on, a persistent gap between poor and rich and how they experience life in this country, a problem with public education. There are still many problems that we have to deal with.”

Never one to rest on his laurels, Legend has also been working on a project with dubstep collective Magnetic Man and Toronto electronic group MSTRKRFT, further expanding the varied appeal which he admits is simultaneously his most impressive and frustrating attribute.

“I feel it’s a gift and a curse, because people don’t know where to put you sometimes, and you kind of get lost in the shuffle at radio and stuff like that,” Legend says. “But it’s fun being able to travel the world, knowing that you’ve got fans in Korea and in South Africa and in France and in California. It gives you a lot of cool places to travel to, I’ll tell you that.”