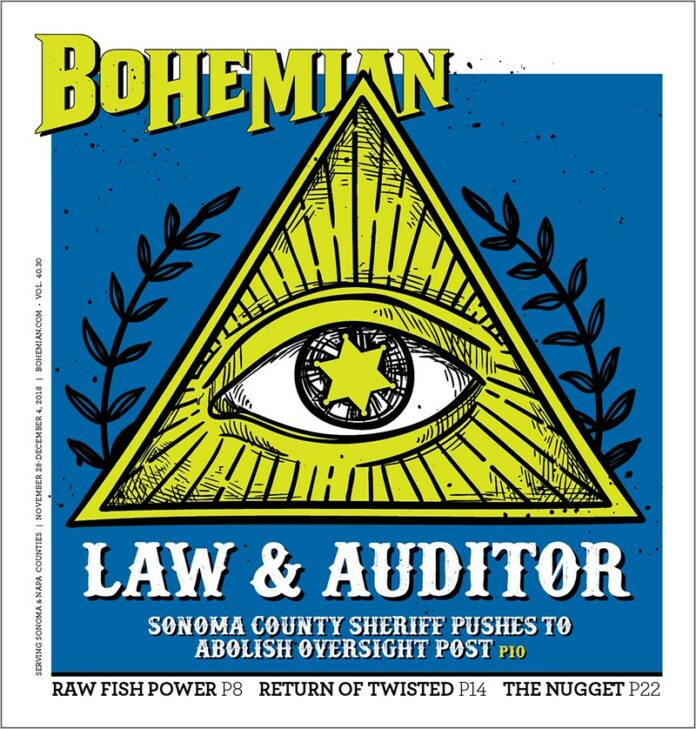 The uncertain fate of a Sonoma County policy-accountability office will be a part of the discussion at the Board of Supervisors meeting on Dec. 4.

There, Jerry Threet, the current director of the Independent Office of Law Enforcement Review and Outreach (IOLERO), will present his fiscal year 2017–18 annual report to the supervisors—as well as proposed new language that would modify the existing ordinance and enhance the IOLERO’s working interactions with the sheriff’s office.

The IOLERO was created in the aftermath of the fatal 2013 shooting of teenager Andy Lopez by the Sonoma County Sheriff’s Office (SCSO). Now, just three years into its rollout, the IOLERO is under fire from an SCSO that would just as soon eliminate the office altogether.

Threet is leaving his $160,000 post at the end of the year, citing health concerns. His annual report, released in September, was met with stiff pushback from the SCSO, which called for the elimination of the IOLERO in a public response to Threet’s report.

The SCSO has called for the IOLERO to be replaced by an on-contract auditor who would not be a part of the county bureaucracy and could, say criminal-justice activists who contacted the Bohemian, signal a watered-down version of police accountability.

The IOLERO was created as a county office to provide for a rolling review of police investigations into claims of officer misconduct. The office is also empowered to field complaints from Sonoma County citizens, to audit investigations that spring from complaints made to the SCSO, and to provide a measure of community outreach via a citizen-led community advisory council.

Threet notes at several junctures in his report that trust and cooperation between the IOLERO and SCSO started to break down in the aftermath of the devastating 2017 wildfires, which occurred as the election battle for a new sheriff was getting rolling. Sheriff-elect Mark Essick takes office next month.

The two-person IOLERO office has a nearly $500,000 annual budget and, in its latest report, spent some time reporting, for example, on the investigation into a controversial “yard-counseling” incident at the Sonoma County Main Adult Detention Facility.

The videotaped yard-counseling interactions between corrections officers and inmates ended up costing Sonoma County $1.7 in settlement fees that sprang from a class-action lawsuit against the county and sheriff’s office. When the settlement was announced earlier this year, Sheriff Rob Giordano announced that the agency had ended the practice of yard-counseling disruptive inmates.

Essick said in a recent interview with the Bohemian that the yard-counseling ban would remain under his leadership. Less clear is how he plans to address the chasm of trust that’s apparently sprung up between the IOLERO and SCSO.

Giordano will represent the SCSO at the Tuesday meeting before the supervisors, four of five of whom have already voted, in closed session, in favor of replacing Threet next year with a new IOLERO top lawyer.

David Rabbitt is the lone supervisor on record opposed to the IOLERO’s continuation. Giordano is also leaving his post at the end of this year, after having been named interim sheriff following the resignation of Steve Freitas.

The timing, and the alacrity of the SCSO’s response to Threet’s second annual report, comes as Essick is poised to take over the top-cop job in Sonoma County in January.

The SCSO says in its response to Threet that it fully supports an audit of its policing practices, but that the supervisors ought to do away with the IOLERO and hire outside auditors on a rolling, non-permanent, contract basis that’s pegged to specific investigations. To Threet and criminal-justice reformers, that’s just another way of saying that the police-accountability protocols in Sonoma County would be watered down under the contract-auditor model. The sheriff’s office doesn’t see it that way:

“The Sheriff’s Office feels a more productive model to accomplish this is to hire a truly neutral, independent, and unbiased auditor for a specific, limited period of time. If there is no expectation of employment beyond a specific period of time, there is no pressure or inherent need to justify IOLERO. This would greatly reduce the chances of either intentional or unintentional bias developing in the auditor. It would also afford the Sheriff’s Office the opportunity to get input from a variety of perspectives outside of the county. The Sheriff’s Office looks forward to continuing to work with the Board of Supervisors to fine tune the auditor model.”

Threet says the SCSO’s call to eliminate the IOLERO and replace it with a contracted auditor was news to him when he read the report. “It’s the first I heard of it, in [Giordano’s] response.”

Essick says that despite taking the reins as elected sheriff in a month, “we still have a sitting sheriff and [Giordano] is the one who is going to be answering, speaking for the SCSO on the report.”

In a phone call with the Bohemian, Essick declined to offer a view on the future of the IOLERO. Giordano’s still his boss, he says. “I could say something that would undermine him. We’re really close to me taking over, but his name is still on the front door. I don’t want to do something to jeopardize the relationship with him.”

Meanwhile, a federal civil lawsuit around the Lopez shooting by an SCSO deputy who remains on the force drags on.

Essick was publically and initially opposed to the creation of the IOLERO as it was being discussed after the Lopez shooting, but expressed support for the office through the course of a robust campaign season that saw the first contested sheriff’s race in the county in nearly three decades.

Word from Giordano, who endorsed Essick, is that it’s premature to discuss what he’ll be saying to the supervisors on Dec. 4. He encouraged the public and media to attend. Police-reform activists will likely turn out in force.

Essick says he’s taking a wait-and-see approach before weighing in on Threet’s proposed changes to the IOLERO ordinance—which generally call for enhanced access to the police agency. The ordinance isn’t on the agenda and isn’t coming up for a vote this week.

“If and when the board decides to take up that discussion and talk about [the ordinance modifications], I’m sure there will be plenty of robust public discussion on it then, and when I get a chance to see what they’re really looking at,” Essick says, “I’d be happy to weigh in—but that could be weeks or a couple months away.”