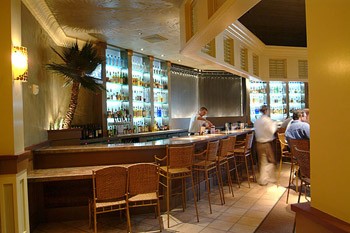 Every Port on the Plate

Latitude is all over the map

It’s hard not to feel a little conspicuous eating in a restaurant that bills itself as “sexy.” I’m reminded of this when cramming an unarousing handful of calamari in my mouth. As I drip aioli and oily crumbs everywhere, my date takes the opportunity to do his own rendition of Latitude’s latest radio spot: “It’s sexy! Latituuude!” he growls.

Chipmunk-cheeked, with greasy fingers, I’m not feeling the heat. Neither are the 60-year-old guys in golf shirts lunching next to us. Engrossed in their Manhattans, they seem to have missed the memo that this Rohnert Park hot spot is supposed to be seductive. I remind them as gently as possible of the advertisement. “Latitude. It’s fun! Latitude. It’s sexy!” They pretend to ignore me, but next time I think they’ll give a little more thought to their wardrobe before coming to such a titillating place.

Opened in December, Latitude’s early publicity made the restaurant seem rife with possibilities. With a pricey facelift on the former Wine Visitors Center, Latitude’s lakeside dining and ultra-loungey bar in the midst of Rohnert Park’s ubiquitous strip-mall chain restaurants sounded intriguing and new. Get past the mind-numbingly stupid radio ads, and you’re promised a cool, unique experience. But after two visits, we were still seeking out the elusive libidinousness we’ve been promised.

Each time we visited, the bar staff was polite but not overly helpful, tending to chat with friends and acquaintances. In fact, the folks at the bar seemed so chummy with their pals that we sometimes felt like the only outsiders in the place.

An indoor waterfall cascades behind the bar (very sexy), giving Latitude some major snaps in the design department. The ceiling soars in the center of the bar, culminating in a stained-glass skylight. The tables and chairs have a rattan, plantation-thing going on, while origami-like light fixtures lend an Asian flair.

Crackled-glass dividers lit from below echo the blue water of the nearby lake. But mosaic tiles on tables and floors confuse the whole thing by bringing in a Caribbean feel. At the end of the visual inspection, you’re left scratching your head (not sexy!) as to what the theme of the place is. My closest guess: colonial Vietnam meets Key Largo meets an ambitious late-90s conference center.

At its heart, Latitude is a convenient hotel restaurant that does a heavy traffic with corporate expense accounts, the over-45 crowd and after-golf lunchers who want a decent steak and a stiff gin and tonic. But does this core contingency really want a sexy experience, or food that comes with a healthy dollop of “L’atitude” (sic)?

It’s doubtful. And the crowd reflects that. The ratio of older to younger patrons, even at night, was marked. On repeated visits to the bar, the room ranged from being nearly empty to hosting only a table of giggling women celebrating a bachelorette party, to thirty- and forty-something couples huddled over drinks. And then there are all those twenty-something girls with the forty-something guys. After seeing several May-December couples and obvious nooners, we’re wondering if Latitude has become, well, a special meeting spot for such lovers. Perhaps the place is sexier than we thought.

Foiled in our own search for sexiness, we got down to the next best thing: eating. There’s nothing to complain about, but there’s nothing to really get excited about, either. The menu vacillates between Pan-Asian fusion and meat and potatoes. Both styles are good, but a bit overplayed.

The restaurant’s own website describes itself as serving “diverse lunch, dinner and cafe menus to satisfy everyone’s palate.” And herein lies the problem. The food is OK in a vanilla sort of way. There aren’t any big risks. There aren’t any huge standouts. The wine list is Napa- and Sonoma-centric, with a good selection of moderately expensive ($35-$54) bottles. Again, no big surprises.

For lunch, the Asian-marinated hangar steak ($15), cooked medium-rare, was rich and buttery, served with a pile of crunchy julienne vegetables and plenty of cilantro. We tried the duck spring rolls with plum dipping sauce ($9) and calamari with chipotle aioli ($9). The rolls were crisp without being overly greasy and were stuffed with exotic mushrooms and sweet duck. The calamari was generously served, tender and chewy without being rubbery or tough.

We also tried the pan-fried half chicken served with potato-spinach puree and raisin, lemon and jalapeño chutney ($14). Good, but lacking a bit in cohesion and flavor. Lunch service was acceptable, while a bit brusque. When we asked for help deciding between two entrées, our server answered with a shrug, “Everything is good.” There is no worse answer.

For dinner, the standout winner among our table of four was the blue-cheese-crusted beef fillet with shrimp. However, when the plates arrived, we were told it was “surf and turf” which, for a moment, felt as if we’d been transported to Sizzler. For $28, I want to be charmed a bit more. The generous and tender slab of meat sat atop a lusty pile of caramelized onions and was served with a red-wine reduction sauce. The shrimp, perched on a sweet-potato purée, lacked finesse and were tough and rubbery. The ahi tuna steak ($19), served rare, was tender and fresh.

Our appetizers, however, fell far short of our expectations. Oysters served on the half-shell with lemongrass mignonette ($1.50 each) were unremarkable in size or flavor. The chicken satay ($8) was unimaginative and a bit paltry. Dinner service was attentive and helpful, from assistance selecting entrées to a perfect wine pairing. Our waiter claimed to have sampled all the restaurant’s wines, an impressive feat.

We were told the restaurant expected 600 for brunch the following morning, Easter. That tells me that people–brunch-eating people, who I’m guessing are not looking for a romantic rave spot after church–like this place. And sitting out on the lake sipping my $7.50 mojito, I like this place, too, for what it is.

Latitude is a somewhat bland, mom-and-grandma-pleasing restaurant that has something for every palate. This is the fourth restaurant for the Left Coast restaurant group, which includes Brannans, the Flat Iron Grill and Checkers. It’s Outback Deluxe, and at some level, that’s OK. It’s just not sexy.

The devil is in the details. After the impressive design of the interior space, the bathrooms at Latitude are a visual black hole. A truly great interior design carries the themes of the exterior space into every public space. The restrooms (and I can only speak of the ladies’ room) are bland and institutional, with ugly tiling and colors that ruin the visual continuity of the exterior. A unique window and architectural ceiling in the women’s restroom cried out to be utilized in a more pleasing way. The cavernous sink area made for disturbing acoustics. A row of chairs outside the restroom area also made for a strange experience–were they merely extra chairs or some sort of bathroom staging area? Frankly, after a few cocktails, we found them to be a tripping hazard.