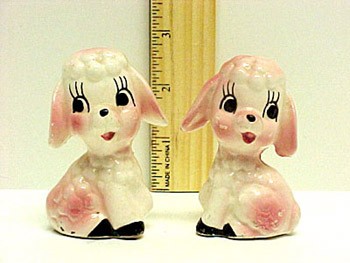 Confessions of a rabid collector

It’s 2am and DozeetOats, Giraffreak and I are in a frenzied bidding war for a chip art lint-brush holder from Amsterdam. There are only three minutes left to bid, and I am biting my nails, rocking back and forth, and cursing the way the computer always seems to freeze during the last minutes of an item’s availability. I am feeling slightly paranoid about DozeetOats. Does s/he just log on to auctions that are about to end, trumping serious bidders simply for the rush of squashing the competition?

Giraffreak and I are listed in the bidding history. We’ve wanted this puppy from the get-go, so there is that curious camaraderie/ rivalry that auctions spawn. But this DozeetOats interloper, s/he is a wild card. Around these parts, they’re called “snipers” and they get their jollies by swooping down at the last minute and carrying off the prize in their talons.

The bar at the bottom of my screen is making a ticking noise in its staccato struggle to beat the clock and download the crucial photos and info. One minute left. I push “Remit?” sending what will surely be the last-chance bid. The screen flickers torturously, then I see the words materialize that, I have discovered over these past weeks, have the power to send me heavenward. “Congratulations, Copasthetic, you are the winner of the Dutch chip art lint-brush holder!”

“Nobody messes with Copasthetic!” I crow, doing a little victory dance in the direction of my bored dogs, whose walks have become less frequent since the addiction began.

“Nobody!” I reiterate to the boyfriend in the next room, who has taken to wearing earplugs to bed so when I need to bid late at night he will not be disturbed. It is then that I see what I have paid for the Dutch chip art lint-brush holder: $140. Whoa! How the hell did that happen? It seems like only yesterday that my maximum bid was $12. I wonder, only briefly, if I have crossed some sort of line.

I do not have an addictive personality. During the days of contraband, I could make last for weeks what others snarfed down in a single Saturday night. I sip my wine. I masticate thoroughly. I am allergic to shopping malls and am not a rabid consumer, except, perhaps, at yard sales. Yet ever since my friend Suzan introduced me to eBay several months ago, I have known craving, greed, obsession and, yes, the need to possess something at any cost.

I have also known sacrifice, turning down appealing invitations because they conflict with the closing minutes of an auction. And loss–boy, have I known loss. Sometimes I find myself staring wistfully at the “Items You Did Not Win” section of the “My eBay” screen, much in the same way a fisherman might look at the snapped fishing line now slack in his hands.

I’ll admit that I am tardy in jumping aboard many national trends. I am a stalled jalopy on the shoulder of the cyber highway, a techno-dinosaur. I am guilty of that suspicion of new things often attributed to the elderly, who often believe the older, more outdated ways to be superior. Hence, my friend Suzan shouldn’t have been so aghast when, after going on and on about the steal she had gotten on a Gucci bag from the ’60s that she’d bought on eBay, I asked her what that was.

“You’ve never heard of eBay?” she asked, truly incredulous. “How could you not have heard of eBay?” Seconds later she had pulled up a chair next to my iBook and helped me pick out my username and password. It was all so friendly, so innocent at the time, these first baby steps. And it seemed like a simple enough equation: seek, find, own.

“Hmmm,” I would say to myself, “there’s a set of Roadrunner juice glasses. I’d sure like those. I can afford $20. Let’s see, the auction doesn’t end until 5pm next Saturday, but I’ll just bring the bid up to $20 now so these glasses will be mine for sure.”

Imagine my shock and dismay that next Saturday when I booted up my computer at 5:05pm and there was a message reading, “We’re sorry. You have been outbid on the Roadrunner juice glasses. The current price is $20.50. Don’t let this item get away! Try again by . . . ,” etc. But of course I could not try again, I could never try again, as the auction on my item was over and I had been outbid by 50 cents.

Now that I am more jaded, I am wilier. I take my time. I leave such odd encrypted messages to myself on my own answering machine as, “Copasthetic, boot up 1700 hours, Monday. Welsh wedding spoon. $28. Go.” I may not be the blushing rube I was when this whole ride began, but I’ll tell you what: that Welsh wedding spoon is hanging above my sink right this minute.

Ever since Antiques Roadshow began airing, everybody and their Aunt May thinks that the shoehorn they found in the back of some drawer in their basement might once have belonged to Melville. I find it mind-boggling that you can type virtually anything, be it animal, vegetable or mineral, into the eBay “Search” box, and a moment later there will be at least one listing, no matter how obscure your quest. When I am allowing eBay to devour the time I should be writing, I will occasionally punch in curious pairings of words simply for their musical appeal, such as “pirate trivet” (two listings!) or “silly skunk saltshaker” (say it four times fast). It is a wonder that someone saved such items thinking they might one day be worth something; it is a wonder that they are now worth something.

When people came to our house they would comment archly to my mother, “You sure like to collect things,” turning their noses up at the tea cozies bursting forth from the linen closet or the battered old editions of Tennyson and Wordsworth on the bookshelf. She would look them straight in the eye and sigh, “Oh, I know, but I’d hate to throw them away and then realize later on that I needed them.”

And now, lo these many years later, when some less politic friend enters my own home and quips, “How the hell can you live with all this junk?” I smile sweetly, the feather duster pausing over my Eiffel Tower collection long enough to turn and airily joke, “Oh, I know. It’s a sickness.”

But what I’m really thinking is, “It’s time for you to go now. I need to be in the final bidding war for the vintage dashboard hula boy in 10 minutes, and you are distracting me.”

But of course, I do not say this aloud. After all, isn’t contact with our fellow human beings more important than e-commerce, more essential than adding some quirky figurine to a shelf already densely populated with quirky figurines? I am aware of all this. I am a reasonable person.

Then again, a vintage dashboard hula boy might only come around once in a lifetime.