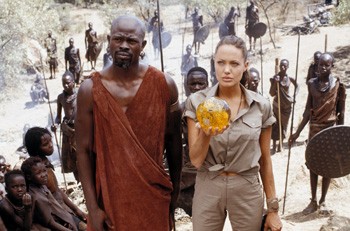 Not Too Buff to Bowl: In ‘Lara Croft Tomb Raider: The Cradle of Life,’ Angelina Jolie goes bowling with Djimon Hounsou.

Early on in Lara Croft Tomb Raider: The Cradle of Life, a buffed-up Lady Croft (Angelina Jolie) is greeted at a remote Chinese village by a twinkling elderly woman with a meaty hug. Informing Croft that all of her “guns and knives” have been assembled, the weathered woman beams as she adds, “I’ve taken the liberty of tuning . . . your bike.”

“Yes!” blurts out Jacquie Phelan, my guest this evening, sitting one seat to the left as the movie–a sequel to 2001’s Lara Croft Tomb Raider –unfolds noisily on the big screen. Phelan’s clearly enthused at the prospect of seeing Lara Croft–adventurer, archaeologist, skin diver, jet pilot, skilled equestrian, and expert markswoman–leap onto a well-tuned mountain bike and go bombing down a Himalayan mountain. Sadly, Phelan’s hopes are dashed to bits when Croft’s bike is revealed to be a great big souped-up motorcycle. Even above the explosions and gunfire that quickly break out on screen, I can almost hear Phelan thinking, “Damn! It should have been a bike!”

“I always make that mistake,” Phelan laughs later on, leading the way as she deftly dodges the movie-leaving throngs and heads outside to the streets of San Francisco. Stopping in her tracks, Phelan turns to say, “I always hear the word ‘bike’ and I have to think, ‘Do they mean ‘bike bike? Or bike motorcycle?‘ I’m usually disappointed.” That said, she steps over to the railing where her own bike–as in bicycle–is securely chained and waiting.

My guest, it should be mentioned, has biked all the way from Fairfax, a 20-mile ride, in order to see Tomb Raider tonight. Not that a 20-mile ride is anything unusual for Phelan. Inducted into the Mountain Bike Hall of Fame in 1988, Phelan is a certified legend, a globe-hopping, fat-tire riding bon vivant who’s logged enough bike miles to circumnavigate the globe three times over. Inspired to begin racing when she saw Breaking Away in 1979, Phelan is counted among mountain biking’s earliest pioneers. In fact, she’s frequently cited as one of the folks who invented the sport form the dirt up.

From 1990 to 1993, she raced on four world championship teams. In the early days, when she was the only woman competing and was still beating the guys in every race (she was unbeaten, in fact, for almost a decade), she became famous as an outspoken advocate for road and mountain biking, and an inspiration to women and men throughout the sport.

For several years she was a popular columnist for Bike magazine. An avid reader and writer who speaks six languages, she began forming off-road skills camps for women in 1984, and in 1987 she founded the Women’s Mountain Bike and Tea Society (WOMBATS), an educational organization with the aim of encouraging girls and women to take up recreational biking.

At 48, Phelan still rides every day, nearly everywhere she goes. Though closing in on the big “5-0”, and even after a long battle with breast cancer, Jacquie Phelan could beat the pants off Lara Croft any day.

And wouldn’t that be fun to watch on the big screen?

As we stand around talking as Phelan unlocks her bike, I can’t help but regret we didn’t get to see something like that in the movie, the plot of which involves Pandora’s box, a mysterious amber orb, and mean people doing bad things.

“It would have been cool,” I remark. “Lara Croft on a mountain bike.”

“Oh, yeah, right. Dream on,” Phelan grins. “Human power? These summer blockbusters are all a celebration of the power of the machine, and this one is full of machines, except maybe for that magical glowing orb and Pandora’s box, of course. Even Lara Croft is more of a machine than a real human being.” Good point. Lara Croft, of course, is the product of a machine; she started out as the computer-generated star of the Tomb Raider video games.

“I try to enjoy these kinds of movies,” Phelan sighs. “I tell myself over and over, ‘It’s OK. It’s just entertainment.’ But then I start thinking too much and the movie is ruined.”

“But you have to like the fact that these movies–films like Charlie’s Angels and The Matrix, movies full of female superheroes –all portray women as being every bit as capable as men,” I reply.

“You mean women who can kill a lot of people? Sure,” she nods, “just like women can smoke like the guys do. We’ve come a long way baby, right? They’re trying to present Lara Croft as a capable, liberated woman, the equal of any guy out there, but all she is, is an imitation man. That’s what Lara Croft is. A beautiful man.”

“Hmmm, there’s something to chew on,” I remark.

“Well, given the state of education these days, I don’t think people are gonna chew on this too much,” she laughs.

On the plus side, Phelan does appreciate Jolie’s portrayal of Lara Croft, if for no other reason than as an antidote to the emaciated, anemic-bulimic waif look that has dominated the screens.

“She probably trained like crazy to get in shape for this, which is great,” Phelan observes. “I love muscles. Muscles are coming back, and I’m very glad about that. The rock stars were all skinny for a long time, and now they’re all working out, trying to get that six-pack on their abdomen. Women too. All of a sudden, gorgeous female movie stars are getting muscular, they’re showing off these really great arms and legs, and suddenly, muscles are less threatening. I’m glad to see muscular arms and legs becoming fashionable again.”

Though slender and lean, Phelan’s own physique is certainly right in line with the muscles-are-good look. Even back a decade ago when she was featured in a controversial magazine ad for Rock Shox bicycle forks–stark naked but covered in a cloak of good, clean mud–people could tell that Phelan had great arms.

“People still stare at my arms,” she admits with a laugh. “They’ve always done that. They stare at my legs too. And sometimes they come up and do this.” She steps up to squeeze both of my biceps, as if checking an exotic fruit for its ripeness. “That’s always been a little strange, a little bit hard to get used to,” she admits. “I always think, ‘Thank God it’s not my boobs. Then I’d really feel weird.'”

Um, where were we? Oh, yeah. The pros and cons of Lara Croft.

“I did laugh at the funny stuff, and I enjoyed a lot of the movie,” Phelan acknowledges. “I just wish I wasn’t so plagued by analyzing the deeper meanings of it all. But then I get real for a moment and I go, ‘What am I doing? Nobody’s even going to remember this movie in a year.’ Unlike the myth of Pandora’s box, which has lasted for millennia, Lara Croft and the Cradle of Life probably isn’t going to have a lot of mileage.”

“I read in one of your old Bike columns that you’ve always wanted to be a superhero,” I mention. “That’s actually the reason I invited you to see this movie. Do you still want to be a superhero?”

Phelan smiles. “Actually,” she says, “I kind of think I am. I am a superhero. And not just because I beat the guys on my bike.”

She doesn’t voice those reasons, but one can easily guess. The dark pieces of her past–the abusive childhood and the suicide of her mother, which she’s written about, and the recent challenges in battling cancer–all of them are hurdles that require incredible reserves of courage and superhero strength.

“Practically everyone,” says Jacquie Phelan, “is a superhero at some point in their lives. We don’t get to know everybody’s hard times, and we don’t always see the things they do to survive those hard times. But if you survive them, and if you remain a whole person, then in my book, you’re a hero.”

For information on upcoming WOMBATS camps and events, check the website at www.wombats.org, or call the WOMBATS hotline at 415.459.0980.