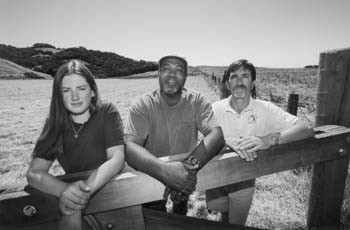 Eye on the prize: Lafferty Access Committee members Laurel Hagan, James Mobley, and Robert Ramirez at the disputed entrance to Lafferty Ranch, a city-owned parcel that remains a civic battleground.

IT WAS A MILD SUMMER evening around 8:30 as Petaluma City Councilman David Keller and his wife, Allison, negotiated their car up the steep, winding road to Lafferty Ranch last month. As an elected official, Keller planned to assess the city-owned property atop Sonoma Mountain–which the city is planning to turn into a public park–for potential fire danger, pending an environmental impact report.

He didn’t get very far.

Just after the Kellers pulled into a turnout in front of the 270-acre ridgetop property–the subject of a five-year civic battle–rancher Peter Pfendler, a Lafferty Ranch neighbor, reportedly halted his car in the middle of Sonoma Mountain Road, jumped out of the vehicle, and began demanding to know who the Kellers were and what they were doing.

Although Keller identified himself that June evening, Pfendler reportedly threatened to have the councilman’s car towed and snapped photos. He was joined by a second neighbor, and a verbal skirmish ensued.

While city officials have a right to access Lafferty, a 433-square-foot strip of land leading to the ranch is still under ownership dispute, and mountain residents are not giving in. Pfendler, who led the battle to purchase Lafferty Ranch, heads the exclusive Sonoma Mountain Conservancy, a group of mostly anonymous landowners fighting to keep the public off the mountain property. The group has hired a cadre of consultants and has threatened litigation if the public access is instituted.

These days, Keller won’t go near Lafferty Ranch. “The situation is too dangerous,” he says.

The Keller confrontation is just the latest chapter in the long, heated struggle among Sonoma Mountain landowners, city officials, and residents who have fought for public access to an area some call the city’s crown jewel. In the latest round, members of a city-appointed committee say they have developed “the least-impacted public park in the history of the world.” Conservancy members argue that public use, with all its attendant problems (real or imagined), will destroy the pristine nature to which advocates of a Lafferty Ranch park are drawn. “How can you enhance wilderness by injecting it with public access?” asked conservancy representative Keith Gurnee in a recently published report.

It all began with a controversial land-swap proposed by the wealthy Pfendler, who owns the less desirable Moon Ranch, which he wanted to exchange for Lafferty Ranch plus $1.4 million. Pfendler did receive $1.2 million for development rights to Moon Ranch, but the rest of the swap was thwarted in 1996 by voters after a divisive debate. Public opinion polls ran 3-1 against the swap, and the Petaluma City Council eventually endorsed a plan to let voters decide Lafferty’s fate. In three days, swap opponents gathered enough signatures to place the measure on the 1996 ballot. Meanwhile, swap proponents prepared two countermeasures. City and county officials later discovered that more than 2,000 signatures on the pro-swap initiatives had been forged.

City officials have spent the past two years developing a park plan, and the conservancy has become increasingly vocal in its opposition. The group has protested steadfastly that public access would create fire hazards, traffic congestion, and other problems; and a Sonoma County judge recently refused to allow limited public tours of the property that would enable people to comment on the project’s draft environmental impact report. The EIR found that such concerns as increased fire hazards, traffic, crime, and geological and wildlife disturbances could be adequately addressed through precautionary measures. But it also noted that the narrow, undulating rural road, which is owned by the county, needs major improvements because it does not adhere to national standards.

“The EIR is an inch thick,” says Hank Zucker, spokesman for the ad hoc Citizens for Lafferty committee. “The experts disproved just about all the objections, but we know we’re going to get sued regardless.”

“Safety is the biggest issue,” says Sonoma Mountain resident Anna Arntz. “The city can’t answer a number of questions. How will the park be supervised, how will it be staffed, and who is going to close the gate? The city is asking us to put a park here and it’s asking us to police it.”

She adds that the road to Lafferty is hazardous. “It’s winding and very bumpy and there’s poor visibility,” she says. A couple of years ago, Arntz had to call 911 after a car full of teenagers crashed, shearing a telephone pole and killing one boy, she notes.

“Maybe the city shouldn’t have built so many houses in the city limits and left more green in town,” Arntz muses. “Why can’t people just drive up to the Lafferty gate, see how far they can see from there, and then go home?

“Do people really have to walk the property to enjoy the view?”

Robert Ramirez of the Lafferty Access Committee, which is helping to design the park, says the public has a right to enjoy the open space and the sweeping views afforded by Lafferty Ranch. “This is an incredible piece of land. You can be above everything literally 10 minutes away from your house,” he says. “You can’t find that elsewhere without doing some driving. Up there, you can be a much calmer person in this high-anxiety lifestyle.”

Under the Lafferty access plan, the city proposes to install a parking lot, fencing, trails, and a 20,000- gallon water tank, Ramirez says. The park would be maintained by the city’s Parks and Recreation Department, and police would patrol the park regularly.

“The park would be open from dusk to dawn, and the gates would be locked at night,” Ramirez explains.

The Petaluma Planning Commis-sion could forward the issue to the City Council for a vote on Aug. 24. If the council approves the EIR, Ramirez says, the park improvements could begin immediately.

Meanwhile, residents shut out by the conservancy will have to settle for a virtual tour of Lafferty Ranch via a new website at www.laffertyranch.org, which includes photos and a history of the property.

“People can ‘walk through’ even if they can’t actually step on the land,” says Ramirez.

No doubt Sonoma Mountain landowners would like to keep it that way.