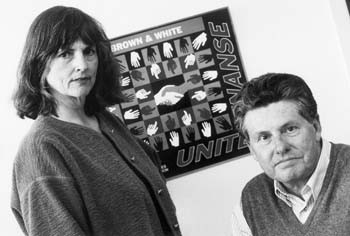 UNIONS IN America have had a rough ride the last few decades. Most baby boomers will remember when unions such as the Teamsters and the AFL-CIO held a powerful, visibly high-profile place of honor within the structure of the American workplace; if individual boomers have never been the proud carriers of a union card themselves, then their daddies almost certainly were–at one time or another.

Yet it is arguably the case that 20-somethings have likely passed through the first two decades of their life with no more than a passing awareness of the existence of unions or of the great social gains that were brought about by the unions of their parents’, and grandparents’, day.

After years of diminished power, dwindling membership and government union busting, Proposition 226’s challenge for the right of unions to make campaign contributions without the written consent of the members, and some exceptionally bad press (linking all unionists to the image of crooked teamster Jimmy Hoffa and the like), several unions appear to be feeling the early swells of a new resurgence in numbers. This change is due, in part, to the forging of increasingly vital alliances with other political action groups, including a variety of grassroots organizations with a broad spectrum of goals and social agendas.

In order to foster an even stronger alliance between these groups, a unique three-day training program– the first annual Labor and Social Action Summer School– will commence June 12-14 on the campus at Sonoma State University. The program will include youth, labor, retirees, and community activists hailing from student/youth groups, trade unions, environmental groups, civil rights organizations, and women’s groups. Planned as a series of workshops, seminars, and social events (including an art reception and an evening dance), the event is open to the public, and can be taken for credit through the Sonoma State Extended Education program.

It is modeled after a similar, 10-year-old program at the University of Oregon that has been responsible for an upsurge in successful community protests and labor actions throughout that state.

“This is a labor and social action school that is targeting both rank-and-file union members and labor activists, as well as students and community activists,” explains Mary Frommer, a longtime organizer with the Service Employees International Union, Local 707. “A lot of this is about building community coalitions and connecting union activists with other organized groups in the area,” she adds. “The labor school is designed to give people the tools they need to get involved.”

These tools are specifically intended to aid local community organizations and churches struggling to make a small difference in their own communities.

“I think that people hear about so many situations they can’t really affect,” elaborates Michael Allen, general manager of SEIU Local 707 and president of the North Bay Central Labor Council. “Sometimes we get swamped with all of it. ‘Gee, what can I do about what’s happening in Indonesia? I can’t do anything about what’s happening with the rain forests in Mexico or about what’s going on in Washington.’ What we’re trying to do in the labor school is to show people that there are local opportunities to get involved, to do something meaningful, to make a difference.

“A lot of churches and synagogues have social action committees,” he continues. “This would be a good event for them as well as for the political action groups. Especially useful will be the workshops on understanding local power structures, knowing whom to talk to, how to approach a certain body in order to get something done. That kind of information is invaluable because it allows you to leverage your resources with other available resources in order to accomplish something.

“That, after all, is the essence of politics.”

IT IS VITAL for our future that we find a way to draw young people into the new labor movement,” says Santa Rosa Junior College history professor Marty Bennett– once a union machinist and boilermaker in the San Francisco shipyards–who is helping organize the summer school. He will be leading a Sunday afternoon discussion of lessons learned from the labor movements of the 1930s and 1960s.

“I think students are seeing how problematic their own economic future is,” Bennett suggests, “and how better wages and working conditions–and better control over their working life–can occur when you have a democratic union. So these workshops will be real nuts-and-bolts stuff–skills needed in forming relationships with the media, ways of developing leadership, tools for coalition building–things they can take away with them and begin to apply. That goes for any organization eager to learn new skills in furthering its social action plans.

“I think we are on the cusp of change,” Bennett says. “The scene is set for something new to emerge in the workplace. I’d compare the situation today to the growth of the early ’30s, except that that labor movement–the old American Federation of Labor– wasn’t seeking young people, wasn’t seeking people of color or women or new immigrants.

“And the new labor movement is.”

“There is a growing group of people going into organizing,” Frommer agrees, “not union organizing necessarily, but all kinds of social action. And they’re dealing with a lot of the same questions and issues that we were dealing with when I was young.

“Whenever I get discouraged about the future, I can look to them. We know that struggles are never going to end, we’ll always have struggles; but we can develop new generations of people who are willing to take the struggle on.

“These are the ones,” she grins, “who will continue the fight for a better world.”

The Labor and Social Action Summer School begins Friday, June 12, at 7:30 p.m., with a free-to-the-public presentation by UC Riverside economics professor and author Robert Pollin, and continues Saturday at 9 a.m. with a day of workshops and classes. For more details, call 545-7349, ext. 18.