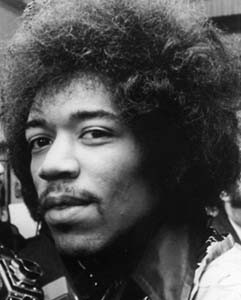 THE LEGAL HASSLES are settled, Hendrix’s heirs are in control of the legendary psychedelic guitarist’s vault, and the results are, well, mixed. Of the several Hendrix releases to hit the market in the past year, this two-CD collection is one of the best and one of the worst. First the bad news: These 37 live tracks, songs culled from Hendrix’s first two albums and including such live concert staples as “Catfish Blues,” were recorded impeccably at the BBC radio studio over a period of several months in 1967. Unfortunately, they include three versions of the forgettable R&B-inflected instrumental “Driving South” (one would suffice, thanks) and three versions of “Hey Joe” (of which two are nearly indistinguishable). Now the good news: This is Hendrix in his prime, for chrissakes! It’s amazing how close these renditions are to the studio versions, right down to the guitarist’s simultaneous lead and rhythm lines. No overdubs. Just incredible, super-charged fiery pyrotechnics backed by an awesome rhythm section (bassist Noel Redding and drummer Mitch Mitchell) that rumbles along like a speeding 18-wheeler. Essential for any diehard guitar-rock fan.
Greg Cahill

PRODUCER BILL LASWELL has reconstructed and remixed material from some of trumpet master Miles Davis’ most meditative works, beginning with the magnificent In a Silent Way (featuring keyboardists Chick Corea, Herbie Hancock, and Joe Zawinul, guitarist John McLaughlin, and drummer Tony Williams), and winding through tracks from the underrated On the Corner and Get up with It–subtly shaping these newly restored performances and never-before-heard themes into a rich textural landscape that throbs with passion and shimmers with what writer David Henderson aptly calls “yogi shit, sitar drones … [and] a Third World thing inspired from ancient kingdoms.” Laswell, who is known for his forays into avant-jazz and world music, has created a vibrant sonic canvas that captures the many hues of a true jazz genius. Prepare to be haunted.
GC

THE FIRST RELEASE in Rhino’s party-pack series is well timed, providing that El Niño rolls over in time for the official summer start-up. Accompanied by a plastic loose-leaf mini-binder chock full of barbecue info, party games, dance steps, and themed menus with recipes, the 35 R&B/soul selections (plus two karaoke tracks) in this two-CD box may seem almost incidental to the package. But the juicy palate of tunes deserves kudos of its own for mixing classics and obscurities, ranging from King Curtis’ “Memphis Soul Stew” and Tony Joe White’s “Polk Salad Annie” to Professor Longhair’s “Red Beans” and Willie Bobo’s “Fried Neck Bones.” And when the last embers have grown cold in the grill, you’ll be needing the final song, Betty Wright’s boppin’ “Clean-up Woman,” to help tidy up that mess!
TERRY HANSEN

Hank Crawford
Memphis, Ray and a Touch of Moody (32 Jazz)

SOUL JAZZ is all the rage these days among retro fans looking to add a little more swing to their thing. And these budget-priced two-CD compilations, both solid sets of groove-laden soul jazz from a pair of ex-Ray Charles saxophonists-turned-bandleaders, are just the ticket. Brother Ray himself sits in on piano on eight tracks from the Newman set–both collections are compilations of four albums each–though it is the jazz ballads from the Straight Ahead album (featuring ex-Miles Davis sideman Wynton Kelly on keyboard and Newman on flute) that really stands out. Crawford can flavor his work with a hard-driving, grits-and-greens style, though he shows a real affinity for ballads and blues. Perfect summer fare.
GC