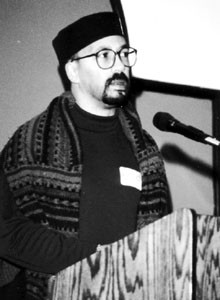 Means of Change: Bill Fletcher advocates “a social force that challenges the wealth and power polarization.”

When Bill Fletcher was 13, he read The Autobiography of Malcolm X. He’s never been the same. “It changed my life,” he says. “It gave me a very different insight into the United States, race, and the international situation, and helped me think about what I wanted to do with my life. I’ve been involved in social justice issues ever since.” Now president of TransAfrica Forum in Washington, D.C., Fletcher spends much of his time working to reverse the devastating effects of rampant racism and greed.

On Friday evening, June 21, Fletcher and two other keynote panelists will have an opportunity to put the spotlight on “corporate tyranny,” which they see as the driving force behind much of the world’s misery. The venue is Sonoma State University, and the event is the opening panel discussion of the fifth annual Labor and Social Action Summer School. Fletcher’s fellow keynoters are Medea Benjamin, founding director of Global Exchange in San

Francisco, and Stephanie Luce, assistant professor of sociology at the University of Massachusetts, Amherst.

Fletcher says that he’ll explain why it’s important for U.S. workers to support unionizing efforts in Mexico, South Africa, Brazil, and other parts of the world. In brief, he says that depressed wages anywhere in the world trigger a race to the bottom everywhere in the world. “Unions are important because there needs to be a social force that challenges the wealth and power polarization that’s going on,” he says.

Like Fletcher, Medea Benjamin began her life’s work at an early age. At the tail end of the Vietnam War, when she was in high school, she became involved in the peace movement. Since then, her work has led her to campaign against obstacles to peace, such as the corporate takeover of the global economic system, the World Trade Organization, the World Bank, unfair labor practices, and most recently, the bloated war industry.

“Defense contractors have undue influence on the U.S. response to Sept. 11,” she says, “and the obscene increase in defense spending has huge implications for labor. It means that there’s no money for teachers to get the increased pay they deserve or for home-care workers to get the kind of benefits they have fought for. It means that it’s harder to continue our struggles around everything from a living wage to more money for social services.”

The third panelist, Stephanie Luce, also found her calling early on. At the tender age of 12 she got her first job as a softball umpire. She soon realized that boys were paid more than girls for this work. Later, she became aware of the steady increase of homelessness in San Francisco and the poverty of farm workers in the valley. As a student at UC Davis, Luce put two and two together and focused her education on living wages, economics, and social justice issues. At the Labor and Social Action Summer School, Luce will discuss the living wage movement.

“Between a quarter and a third of U.S. workers with families earn hourly wages that are below the federal poverty level,” she says. “The federal government has been slow to raise the value of the minimum wage over the last few decades. Many jobs done for cities–such as the janitorial services in public libraries and city halls, or security services–used to be done by city employees who had good wages, a union, and stable employment. In many cases, the push to save on taxes meant that these jobs were privatized.” Luce says that the corporations that now employ these workers provide low wages and poor working conditions.

The Labor School will resume on Saturday morning, June 22, with a plenary session on organizing for social change. Fifteen workshops will follow, under the direction of inspiring and nationally known organizers. Topics include Building a Movement, Living Wage Campaigns, Election Reform, Sexual Orientation and Organizing, Puppet Theater and Direct Action, Coalition Building, Working with the Media, and more. The Labor School will end with appetizers, a no-host bar, networking, and socializing.

The North Bay Central Labor Council is the lead sponsor of this event. The 40 co-sponsors include Petaluma Progressives, Catholic Charities, and the League of Women Voters. For more information, please call 707.545.7349, ext. 219.