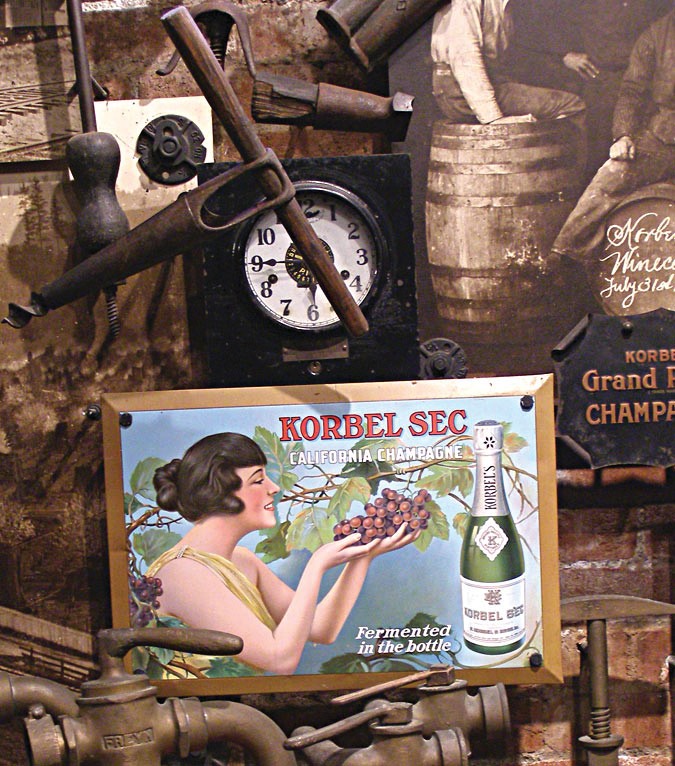 Picture this: Sweeping vineyards. Towering redwoods. This is how the movie starts. It starts with pretty pictures. And then—boom—there’s a revolution. Bang. Prison. Escape. And then, Gold Rush San Francisco: fat cigars, empire-building, tree-felling, booze-mongering. I’m on the edge of my seat here. But I’ll tell you how the movie ends. It ends with a nice, bubbly glass of America’s favorite Champagne.

Korbel, the movie, is just one of the rainy-day entertainments highlighting a tour of these historic “California champagne” cellars, founded in 1882. Yes, the old Korbel tour must be the most timeworn if beloved winetasting activity in the whole of our North Bay Bohemia—not exactly high on my list. Here’s what happens to items not placed high on my list: I don’t get around to them. But the season being what it is, many of us with family visiting and eager to be shown the sights, there’s no better time for residents to finally visit.

There’s precious little more God-love-it touristy than the company history film genre. Screened in an oak pew-furnished theater, this one’s brand-new, and has been given the full Ken Burns treatment: baritone narration, handlebar moustaches, old photographs popping with the latest documentary effects, and Korbel’s own historian providing context in a sweater vest.

Who knew that F. Korbel and brothers were vintners of last resort, having run out of big trees for their sawmill; that before grapes, they gave tobacco a go; that it all started with cigar boxes; that there was such drama to the story—in the 19th century? Lots of people know this, because they bundled up for a winter’s day drive down River Road—originally a railroad for hauling out the redwood forest that rises again around the vineyard, almost as if it nothing had happened—to take the old tour.

Untold dusty bottles and antique wine vats later, free beverages are served. I wouldn’t have bothered you about the history lesson, if it wasn’t for this part: Korbel’s Anniversary Sec ($14) celebrates 130 years with a handsome historical label, floral-spicy aroma and refreshing finish (the anniversary being 2012, not the—pop, swoosh, clink—new year).

More trivia arrives with a pour of lower-dosage Korbel Natural ($14), nevertheless rich with golden apple aroma and creamy mousse. The story goes that Adolph Heck, who purchased the concern in 1954, created this drier style using natural grape juice instead of sugar for his diabetic wife. The top shelf isn’t out of reach at Korbel; the 2005 Russian River Valley Le Premier ($25) has a fine, faint reminiscence of the good dead yeast. And that’s the end of the tour. Exit through the wine shop.