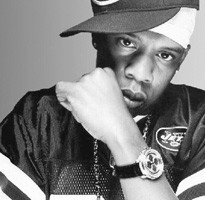 Jay-Z's return from retirement, so what?

Ending the most absurd retirement in pop history is Kingdom Come, Jay-Z’s first album since heading up Def Jam. The Brooklyn rapper’s fully aware of his new job’s proximity to the street life he previously dramatized, preemptively adapting his Mafioso motif in “The Prelude,” which likens him to legitimacy-seeking Michael Corleone before he proclaims himself “a new improved Russell [Simmons].”

But the line continues, “I say that reluctantly, ’cause I do struggle,” the first of many uncharacteristically vulnerable moments in a conflicted lyrical style perfected by his sensational protégé Kanye West, one of the album’s many superstar producers. Jay-Z’s “Reasonable (self-) Doubt” is refreshing, considering his usual braggadocio, but it worked better in the childhood glimpses on 2003’s harder-edged Black Album, which is now robbed of its role as the perfect farewell.

His new mature, confessional style is most effective on socially conscious tracks like the Dr. Dre-produced “Minority Report,” an emotional meditation on everyone’s inadequate response to Katrina. But despite his admirable water crisis campaign, disingenuousness looms when materialistic and philanthropic personas mingle in “Oh My God.” “Lunch with Mandela, dinner with Cavalli, still got time to get water out to everybody.”

But HOVA, short for Jehovah, still takes the whole “made in our image” thing too seriously with his blatant biting. “Lost Ones” begins rebuking former partners’ newfound flashiness (Sound familiar, Lauryn Hill fans?). The song then laments problems with his unbelievably gorgeous girlfriend Beyoncé (Don’t blow it, man!). Needless to say, “relationship Jay” doesn’t quite suit him.

Although technically skilled, Jay-Z was crowned “best rapper alive” by default, aided by the murders of geniuses from both coasts and his own overexposure. This uneven, slickly produced comeback really pushes his luck. More than once, he obliviously announces, “I’m the Mike Jordan of recording.”

The Forgotten Art of Audacity