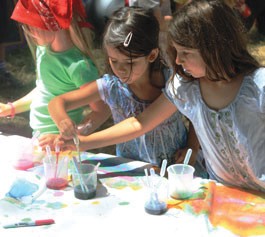 Pipedreams sometimes take a while to develop, but the first metaphorical pipe of the Children’s Museum of Sonoma County is being laid this weekend with a groundbreaking ceremony. For years, the idea existed as a traveling van called Museum-on-the-Go that popped up at various functions around Sonoma County. Inspired by the Bay Area Discovery Museum in Sausalito, museum organizers leased a space next to the Schulz Museum in Santa Rosa in 2011, and on Saturday, the first shovels hit the ground for the 5,400-square-foot project, which will be open by early 2014. It goes without saying that there’ll be plenty of activities for kids. The fun starts at 11am at 1835 W. Steele Lane, Santa Rosa. $5 donation.

“I think the banking system in the United States works efficiently with an adequate amount of transparency and access to capital for all,” said nobody who is capable of rational thought. “Of course the banking system sucks, but what can I do about it?” said everyone else. That’s what the Public Banking Institute aims to find out with its Public Banking Conference, featuring speakers like Matt Taibbi, finance journalist for Rolling Stone magazine, and a host of others. The theme of the forum is “Funding the New Economy,” focusing on rebuilding local economies. The seminar takes place June 2–4 at Dominican University, 50 Acacia Ave., San Rafael; Taibbi speaks June 2. Tickets range from $35 for one night to $295 for the whole weekend. www.publicbankinginamerica.org.