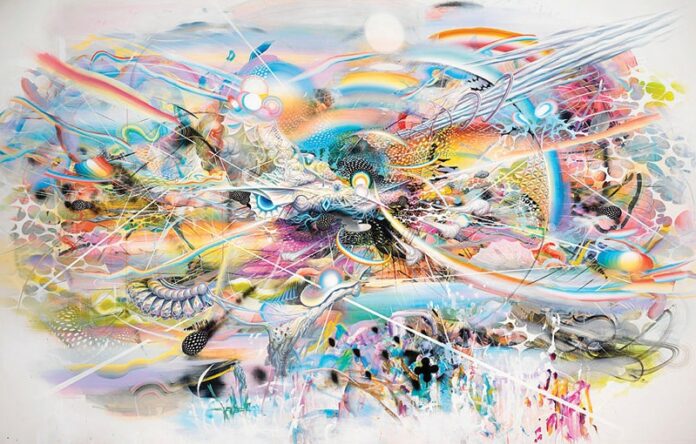 The artists in “Cosmic Terrain” don’t care for labels. Labels are for art critics, not for working artists like Damon Soule, Oliver Vernon and Mario Martinez, aka Mars-1.

“Cosmic Terrain” is an exuberant exhibit featuring 22 pieces (including Transcendental Disaster, by Mars-1, pictured). Infinite Tapestry Round, a 6-by-6-foot composition in black-and-white, looks like it might leap from the wall and gyrate round the room. Damon Soule’s Unfoldment and Mario Martinez’s Symbiosis could serve as the set of a sci-fi movie. Dark City, the collaboration between Martinez, Soule and two other artists, David Lee Chong and NoMe Edonna, whirls and swirls with objects both organic and mechanic. Bright colors clash, chaos engulfs the canvas, and, amazingly, it all coheres.

Coordinator Scott Hess says that since the opening, he’s never seen so many 20- and 30-somethings turn out for an art show in Petaluma. “It’s a pretty traditional town,” Hess says. “Usually, there’s a hew and cry when art so unconventional is on exhibit, but not this time.”