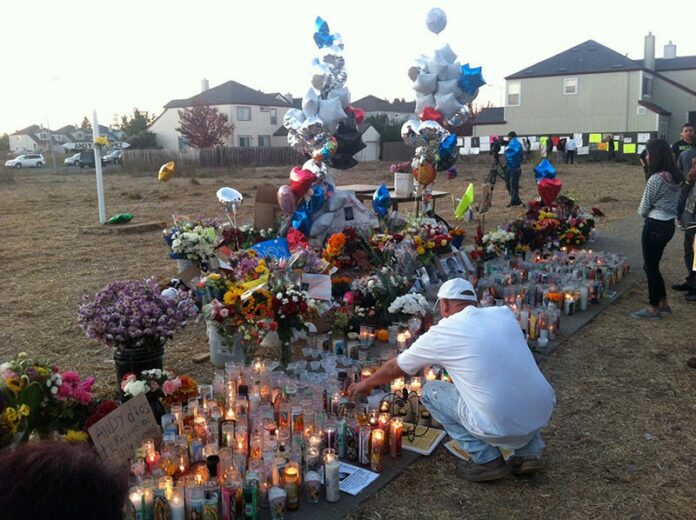 As the first day of 2014 wound to a close, a mysterious fire destroyed part of a tent, photos and other sacredly infused objects at a large Moorland Avenue memorial to Andy Lopez, at the site where the 13-year-old boy was shot and killed by Sonoma County Deputy Sheriff Erick Gelhaus on Oct. 21.

Speculation about the fire’s origins immediately set the community on edge. In a letter addressed to retired Santa Rosa Police Department chief Tom Schwedhelm (he stepped down Dec. 20) and Sheriff Steve Freitas, dated Jan. 2 and sent via overnight delivery, Lopez family attorney Arnoldo Casillas wrote, “The first-hand accounts I have received indicate that the fire appears to be intentionally set.” Casillas continued: “The intentional burning of the monument represents a threat against the parents of Andy Lopez based upon their race/ancestry/national origin and is
a blatant act of intimidation. . . .” In the letter’s conclusion, he requested that officials undertake a “hate crime investigation.”

Other activists and community members soon leapt to the conclusion that the fire had been set with some sort of malicious intent; with tensions running high since the shooting and Gelhaus’ subsequent return to work—despite calls for his ouster—the assumptions are somewhat understandable. But it may be time for cooler heads to prevail. A daylong investigation by arson investigators from four agencies determined that the fire was started accidentally—most likely by a burning candle at the center of the memorial structure. Central Fire Authority chief Doug Williams told the Press Democrat that no evidence of accelerants, such as gasoline, were found at the site. Plans are in the works to rebuild the memorial.