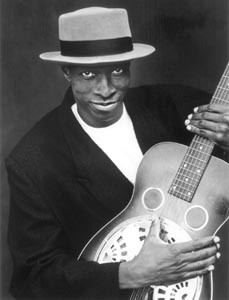 I KNOW I’m known as an acoustic blues guy and I know I’m in that genre,” says bluesman Keb’ Mo’. “I know that’s probably my best genre. Probably my best performances are in that area.

“Because if I stay what I’m supposed to be, then there’s a group of people who talk about why you don’t try something else. And then when you do something else, people wonder why you don’t stay the same way. So you know, Ricky Nelson says it the best: ‘You can’t please everybody, so you’ve got to please yourself.'”

It took Keb’ Mo’–his real name is Kevin Moore–some 20 years to define himself as a blues player with the release of his 1993 self-titled CD. But it’s not as though he hadn’t recognized his affinity for the style long before that.

In fact, he remembers as a teenager being absolutely enthralled by a performance by acoustic blues artist Taj Mahal, who today remains a major influence. “He came right to my school,” Moore recalls. “It was like an inkling, a preview of things to come. I always felt that show was for me.”

But at that point, Moore didn’t feel that he could answer his calling to the blues. It was the 1970s and blues had fallen out of favor in urban areas like Compton, the L.A. suburb where Moore grew up.

“I wanted to be hip. I was afraid, which was indicative of my life for the next 20 years,” he says.

By the late 1980s, Moore still hadn’t found his focus, but he stuck with music, taking odd jobs along the way to make ends meet. Finally in 1990, things started to fall into place when he was invited to play a role as a musician playing Delta blues music in Rabbit Foot, a play produced by the Los Angeles Theater Center.

The role gave Moore the opportunity to delve further into the music of such acoustic Delta blues artists as Big Bill Broonzy and Mississippi John Hurt. “You have a month to really dig through that music and really explore it and get into it while the actors are learning their lines. It’s a wonderful process.

“I could feel the Delta calling.”

SINCE THEN, Moore has been on a fast track. A cassette of his songs netted him a deal with Okeh Records, a label that was being relaunched by Epic Records. His 1993 self-titled debut immediately earned him recognition as a blues artist to watch, and his 1996 follow-up, Just Like You, cemented Moore’s stature as one of the most promising new artists in blues. That CD won the 1997 Grammy for Best Contemporary Blues Album, and Moore also won prestigious W.C Handy Awards in 1997 and 1998 as Acoustic Blues Artist of the Year.

Now Moore is hoping to build on those achievements with his third studio CD, Slow Down. The CD may redefine Moore’s image. With the exception of the solo acoustic “I’m Telling You Now” and a cover of Robert Johnson’s “Love in Vain,” the remaining 10 songs feature full-band arrangements. Several tunes, such as “Soon As I Get Paid” and “Muddy Water” rock quite convincingly. While Moore’s songwriting on Slow Down has justifiably been praised, a few early reviews of the CD have found fault in the slick production.

“I think the polish people are hearing isn’t necessarily in the performance, but in the post-production, the mix rather than the presentation of it, and in the care taken in recording,” says Moore, who co-produced the CD. “We sat down and we got sounds, and we spent a little more time beforehand.

“But we went in and performed.”