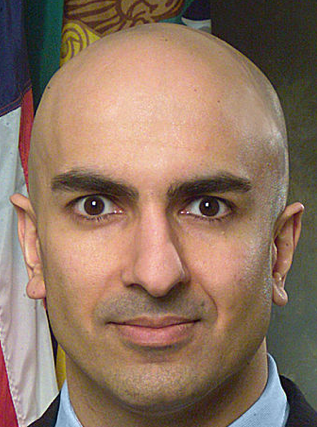 California Republican gubernatorial candidate Neel Kashkari gave his party a major wingnut reprieve this week when he narrowly beat out Minuteman Assemblyman Tim Donnelly for the right — as the common parlance goes — to lose badly to incumbent Gov. Jerry Brown in November.

Kashkari slipped by Donnelly with a 4 percent margin, but both GOP candidates drew vote percentages in the teens, whereas Brown hogged up some 54 percent of the total vote cast.

Kashkari, a former Treasury Department official who has said he voted for Barack Obama in 2008, has emphasized low taxes, lots of fracking, expanding educational opportunities, and killing the SMART Train. Meh. He’s gonna have to kick it up a few notches if he’s got any chance here.

Did somebody just say, marijuana to the rescue?

At a campaign stop not long ago Kashkari said he didn’t support legalization, but also didn’t support the War on Drugs as currently waged. One surefire way to end the war, brother Neel, is to legalize marijuana!

What if — what if — Kashkari were to, as these things go, “study the issue a little more closely” in coming weeks before coming out in favor of legalization? He might start with recent polls that show at least 55 percent of Californians support legalization. He might then study Colorado Gov. John Hickenlooper’s budget proposal that says legal weed in that state will bring in around $100 million in taxes this year.

Closer to home, Kashkari might study a Marijuana Policy Project’s statistic that indicates California is itself reaping over $100 million a year in taxes from its pot dispensaries. He might take a look at how California dispensaries will now operate under a single, statewide set of rules, with the help of law enforcement, and he might have a look at a Harvard study from a few years back that said prohibition costs taxpayers about $17 billion a year.

He might eat a chocolate bar with Maureen Dowd in a Colorado hotel room and freak out at the enormity of the opportunity to overtake Moonbeam with a Nixon-in-China move that would send every last freaking pothead in the state to the polls to vote for him!

Brown has already signaled opposition to legalization of the demon weed on the grounds that people will get lazy if they smoke it, costing jobs and productivity. Meanwhile, half the state is already getting baked.

It’s a lazy argument premised on a dumb stereotype. Try some sativa, governor, that stuff will keep you up all night working on your budget — or, just maybe, working on your plan to outflank Kashkari on the pro-pot tip if the moderate GOP candidate gets wise and supports legalization as a way to beat you.