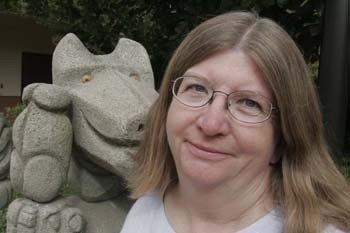 Believing in artists and the power of culture has made intrepid advocate Karen Petersen’s name synonymous with raising arts awareness throughout Sonoma County. A native Petaluman and two-time Berkeley grad, Petersen heads the SRJC Petaluma Center’s Mahoney Library, a locale that has become much more than another friendly reference desk. Through Petersen’s guidance, it has also become a center for arts and culture.

Walking past the doors of the Mahoney Library at any given time, one might find an array of paintings, sculptures or photographs from both well-known artists and those who should be well-known. One may hear everything from Chinese music to a Baroque ensemble to Latin American rhythms echoing throughout the library during arts and lecture events.

“Wherever I’ve worked, I’ve tried to use the space to support the arts,” says Petersen. “You have to think of the space as a gift. You have to try and see the most colorful and creative purpose for a space.”

Her long-term commitment to the arts–demonstrated not only by her advocacy but by the book Women Artists: Recognition and Reappraisal from the Early Middle Ages to the Twentieth Century that she co-authored with retired SSU English professor J. J. Wilson–extends from the visual to the literary. Petersen and Wilson also cofounded the legendary Sitting Room library in Cotati, a free literary study space. While the Sitting Room initially had a women-centered focus, today the entity has broadened into a community-oriented library while continuing its highly regarded tradition of presenting literary workshops. Petersen has also been integral in the organization and promotion of the Sonoma County Book Festival, which just celebrated its sixth anniversary earlier this month.

Evolving from her own love for art to the walls of the Mahoney Library and beyond, Petersen was approached in 1998 by a group of students who hoped to form a new organization to support, and bring greater attention to, local artists. The result was the creation of the Petaluma Arts Council, an entity that successfully lobbied Petaluma’s City Hall for the creation of a public arts commission and to gain a percentage of development fees for public art earlier this year.

“I’m very hopeful for the percentage for art programs,” Petersen says. “It seems clear to everyone there are great changes happening. There’s a great deal of development going on. I want culture to be a part of that. Wine and food are great. But Sonoma County is more than just wine and food. Culture and landscape are a vital part of Sonoma County.”

While Santa Rosa also has a percentage for public art programs for civic projects, Petaluma is the first community in Sonoma County to incorporate public funding from the commercial development community. The idea is so popular, Petersen says, that it has gained solid support of developer Matt White of Basin Street Properties, from whose pocket much of the percentage will come.

“This is all part of looking for strategies to increase support for the arts,” says Petersen.

Petersen’s continued work has helped create an upwelling of support for the arts, exhibited in the success of the Petaluma Arts Council’s programs. She says that the annual Dia de los Muertos event is a highlight of the council’s mission. Though she is quick to give credit to the many who work on the project and its leader Margie Helm, the event fulfills one of Petersen’s core hopes for the arts.

“It really reaches across the community, languages and cultures in a way that brings the people of Petaluma closer together.”

Petersen’s arts-advocacy efforts will continue to blossom as the Mahoney expands to a new 50,000-volume library with the build-out of the SRJC Petaluma Center, and the current library site becomes a 250-seat arts auditorium. Possibilities for the venue include theater productions, chamber music performances and collaborations with the local community, including the continuation of opera previews with Cinnabar Theater.

“I think there’s an audience out there, no question,” says Petersen. “My philosophy is along the lines of ‘build it and they will come.’ You simply have to provide space and better utilize places.”

For Karen Petersen, the reinvigoration of public appreciation–and access–to culture is an art all its own.