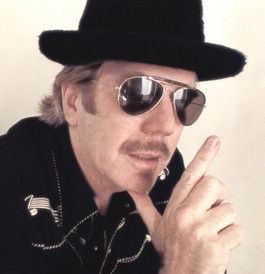 Dan Hicks on his musical forerunners

He stole the name.

Dan Hicks freely admits that his latest themed musical revue, The Kollege of Musical Knowledge, was inspired by a 1930s’40s radio program with the same title, a popular quiz show with music hosted by swing-era bandleader Kay Kyser. But instead of asking questions, “perfessor” Hicks is out to share songs and history reaching back into those same decades.

“I researched and looked stuff up,” he explains in all seriousness. “I’ve written out information, a little bit of history and a little bit of color, that I narrate between the songs.

The curriculum, all performed by Hicks and his six-piece Hot Licks, covers early blues, jug band music, swing, 1940s pop, cowboy songs and bebop. It continues up through the folk years with some of Hicks’ songwriting contemporaries: Bob Dylan, Paul Simon and Tom Waits. There’s also a healthy dose of his own material, he adds, “that folk-jazz, singer-songwriter kinda thing.”

But he stops short of identifying the roster of writers as those who shaped his own distinctive style. “You could call them influences,” he acknowledges, with some reluctance. “I’ve been influenced by all the music that I’ve liked throughout the years.”

Our interview becomes more animated when it turns to Hicks’ personal history in Santa Rosa. “I’m definitely a Sonoma County guy,” he confirms, a Santa Rosa resident from age 11 through his graduation from Montgomery High, class of ’59. A drummer in those student years, Hicks happily cites band teacher Alphonse Schmaltz as a musical mentor (“We used to have jam sessions at lunchtime”) and recalls a short stint playing the snare with the Santa Rosa Symphony alongside Norma Brown, wife of conductor Corrick Brown, on triangle.

Moving on to San Francisco, Hicks eventually became the drummer with the Charlatans, the group sometimes cited as the first of the City’s true 1960s bands. Then, as his songwriting and guitar playing took precedence, Dan formed the first in a series of Hot Licks ensembles—and hasn’t stopped since.

Hicks has taken to branching out a bit in recent years, developing and performing other themed shows around the folk years, singing cowboys and “swing noir.” Currently in the works is a project called See You in the Funny Papers. “I’m trying to collect what I think are all my humorous songs, and put ’em all in one show,” he explains, “sorta tying it in with cartoons somehow.”

Meanwhile, his Kollege presentation—complete with tiny certificates of graduation for attendees—makes its Sonoma County debut at the Raven Theater this weekend. “They knew about the show and asked for it,” Hicks says, bemused. Then he adds, reassuringly, “It’s not so different; there’s plenty of the Hot Licks sound.”