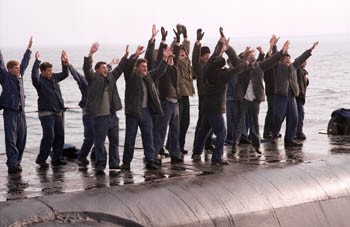 Harrison Ford and Liam Neeson reenact ‘Mutiny on the Bounty’ on the submarine ‘K:19: The Widowmaker’

Because of the breakthrough opening sequence in Saving Private Ryan, the modern war film can be a lot more frank about what happens to human bodies in battle. But other films following the lead of Saving Private Ryan, such as Black Hawk Down and Windtalkers, also suffer from the same problem as Private Ryan‘s ending. After showing such carnage, it’s hard to wrap up the film nicely in the flag, even when, as in the case of K-19: The Widowmaker, the flag has a hammer and sickle on it.

This story of the Soviet hellboat is shaped by screenwriter Christopher Kyle as a 1961 Cold War version of Mutiny on the Bounty. Harrison Ford plays Capt. Alexi Vostrikov, a by-the-book martinet like Captain Bligh in the more enlightened versions of the Bounty story. For political reasons, Vostrikov has been sent by the Kremlin to override Capt. Mikhail Polenin (Liam Neeson), the trusted skipper beloved by his crew.

The new sub’s mission is psychologically important. The U.S.S.R. hopes that this nuclear-powered submarine will rival the U.S. boats within firing distance of the Soviet borders. However, the sub is bug-ridden. (The bow is held together with trim that looks suspiciously like duct tape.) On the maiden voyage, the nuclear core sprouts a leak, a condition worsened by a lack of emergency planning and a grass-green reactor technician (Peter Sarsgaard). The sailors risk a horrible death by radiation poisoning to fix the problem. If they fail, the movie argues, a meltdown might convince the Americans that the Soviet Union is attacking a nearby NATO base with nuclear weapons.

Ford’s proven appeal doesn’t fail him. Vostrikov is another old-movie heroic role, tailored to a ’70s dropout, now aging, and once again we see the slight discomfort with authority that’s Ford’s hallmark (trouble is always thrust upon him). Neeson’s also a perfect fit in the Fletcher Christian part, and the film adds some nightmarish new details to the submarine ordeal movie.

Still, Kyle’s script makes the plot as simplistic as the characters. And proposing the fate of the sub as an incident that might trigger World War III seems suspiciously like an overstatement of the case. Plus, the film’s upbeat ending ignores the fact that the sub killed 28 sailors in 1972 during an undersea fire.

Director Kathryn Bigelow has had experience with horror (the influential 1985 vampire film Near Dark) and science fiction (Strange Days). Certainly K-19 goes beyond an ordinary war film into the realms of, first, science fiction and then horror. When it tries to loop back into the stirring they-died-with-their-boots-on finale every self-respecting war movie needs, the film can’t recapture that military spirit: everything we’ve seen has been too horrific.

The story of the submarine K-19 isn’t so much about legendary heroism as it is about hidden injustice. As always, the version we hear is the officers’ version, in which the word “honor” is supposed to make up for the lives lost under their command.