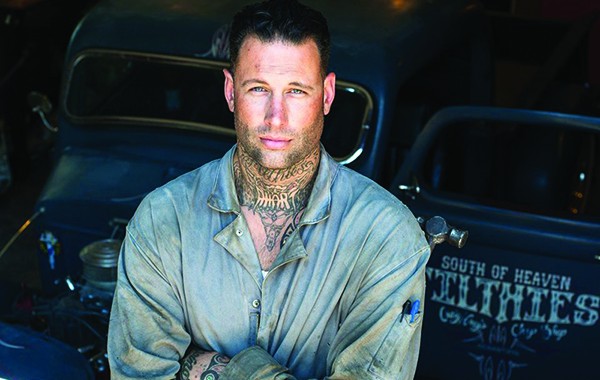 Tucked neatly behind one of the lush curves on Burnside Road in Sebastopol lies the unexpected: a big, badass custom shop called South of Heaven. Owned and operated by Craig Ahart, the 3,000-square-foot shop is housed in a massive two-story barn that he hand-built about 11 years ago, with a specific eye toward making it appear as vintage as the classic cars he specializes in modifying.

For 38-year-old Ahart, the devil is in the details, and custom means custom everything. No detail is too small to go unnoticed, and he’s been known to spend hours on something as minor as a mirror bracket, just to get the right lines. And it shows. While Sonoma County has no shortage of classic cars, Ahart’s designs are recognizably unique, a perfect blend of appreciation for traditional lines, the unmistakable influence of low-rider culture and his signature style.

The works of art rolling out of South of Heaven may not bear the candy-coated, flashy look of mainstream hot rods, but they’re no less eye-catching. Ahart describes the shop’s style as “low-budget hot rods” and aims to build “a car you own, not that owns you.”

“There are a lot of older cars out there you don’t ever see,” he notes. To Ahart, if you can’t enjoy driving your car because you’re too busy preserving it, that takes the fun out of it.

Now 20 years into the game, this self-taught artisan has made a name for himself. His cars have won awards and graced the pages of hot-rod magazines.

Ahart’s passion for the build developed early in life, and he largely credits his grandfather, electrical engineer Jack Ghilardi. “My mentor is this guy right here,” Ahart gestures toward a framed picture, each finger of his right hand bearing a tattooed spark plug. He adds, “He was basically my dad. He was the nicest guy ever.” Ghilardi bought Ahart power tools when he was 10 and taught him how to use them.

“Instead of toys and stuff, he’d show up with a stack of lumber,” Ahart reminisces, “and he just knew what I wanted.”

Though his grandfather’s main hobby was fishing, he did have an affinity for cars, having built a Model T from scratch as a young man. Ahart recalls Ghilardi tasking him with painting a ’68 Plymouth Barracuda, only to gift it to him. Much to Ghilardi’s dismay, his grandson turned down the gift; Ahart knew early on that muscle cars were not the type of classic vehicle that fueled his fire.

Raised by his mother in Marysville, Calif., Ahart never had much money growing up. “It was just me and her,” he says, “but she was a badass mom.” He recalls a pivotal moment in his teens when a Mervyn’s ad featuring a little red pickup caught his eye. The truck seemed accessible to him, and he remembers thinking, “I could have something like that.”

Ahart started learning by doing, developing unconventional building techniques along the way. “I was really intimidated by cars at first,” he recalls. “I didn’t know the slang of how you talk about things.” Though his friends didn’t work on cars, Ahart became an influence, and they too got involved. Tough times call for tough measures, and though he’s not proud of it, Ahart and his friends “used to rip off junkyards, because we had no money to buy parts.”

He started seriously working on cars at the age of 17 and completed his first full build, a 1950 Chevy pickup, at 19. “It was all about how low I could get that tire sucked into that fender—that was my main goal.”

When he was 21, Ahart’s mom moved to Bodega Bay, and he rented and lived in her garage. Around the same time, he started working at Coast Auto Body in Bodega with owner Rick Karcher (the shop later moved to Valley Ford), where he met Greg Passalaqua. The two fueled one another, and Passalaqua encouraged Ahart to open his own shop. Ahart decided to give it a try. If it worked, he figured, great, and if not, he’d end up with a solid workshop.

In 2002, Ahart and his mother bought a property on Burnside Road that originally came with a house built in 1936 and a garage, which Ahart turned into a granny unit for his grandmother. He built the workshop space in 2003, and in 2005, South of Heaven was born, outfitted with tools that once belonged to Ahart’s and Passalaqua’s grandfathers. Though Passalaqua is no longer involved in the shop, they remain friends.

“I couldn’t do it without him,” says Ahart.

Vega shares Ahart’s passion and is driven by seeing their clients get amped by the results they produce. “I’m happy to be part of the journey of making their dreams come true,” says Vega.

Their third team member is apprentice Devin Grieb, 26, who is learning from the pros the best way how: by doing everything they don’t want to do. Ahart hopes to one day pass his knowledge on to his two sons, Dallas and Travis, eight and six.

THE COST OF CUSTOM

The biggest challenge in the business, according to Ahart, is that people often underestimate the cost of a custom build. “New people are floored,” he says. “They can’t believe how much it costs to do stuff. People familiar with cars at least have an idea.”

There’s a difference between getting an estimate for a repair and getting one for custom work. It would be like going to a sculptor, wanting to commission a piece of art, and expecting an estimate. It just doesn’t work that way.

“It’s not easy putting a price on some of the things I do,” Ahart says, “because I don’t know how long it’s going to take.”

To build a car from scratch takes anywhere from $30,000 to $50,000; the engine alone can run $12,000. South of Heaven has gotten more into the practice of buying cars than modifying and selling them, but they still do custom work with clients who understand the cost of craftsmanship.

In 2011, Ahart founded South of Heaven’s private car club, the Filthies. The club’s 17 members meet once a month in the “clubhouse,” a beautifully handcrafted hangout area Ahart built, complete with a full bar, on the second story of the shop barn.

They show off their vehicles together at car shows and host events, like the upcoming Rods and Kustoms Drive-In on Aug. 23 in Valley Ford, which is open to the public and will feature live bands, a drive-in movie, food, vendors and a pedal-car raffle, in addition to having custom hot rods and motorcycles on display.

But make no mistake: the club is not in search of new recruits. Filthies member Bennie Wagers says, “We’re firing, not hiring.” Ahart adds, “We don’t really care to have any more members. You have to know someone and put in time at the shop. You can’t just join.”

For the future, Ahart wants nothing more than to build more cars. “All I want to do is flood everywhere with hot rods.”

But a point of contention for him is the lack of camaraderie between local builders. “I’m not intimidated by any other builders,” he says. “Builders should have no problem with other builders. We all have the same goal of trying to get
cooler cars on the road.” Yet he says that on several occasions he was not well received in other shops. “You can feel that they’re uncomfortable, or something’s wrong,” he says. “I wish it wasn’t like that.”

Today, the South of Heaven property has no shortage of nostalgic eye candy. Numerous classic rides in various stages of modification can be seen on the lot, from a stunning 1927 Roadster (that arrived “in a pile for $400”) to the ’34 Plymouth coupe that’s next on Ahart’s list. Of this collection, only two are Ahart’s: a ’54 Cadillac sedan (modded into a two-door convertible) and his “daily driver,” a ’36 Dodge pickup.

And if you’re wondering what his tools of choice are for this level of craftsmanship, the answer is surprisingly simple: big hammers. “A heel dolly and a hammer are the two main things that I use—and a pair of pliers. I use big hammers.” His reputation for being able to precisely shape metal with just hammers precedes him.

When asked what his favorite build has been so far, Arhat thinks for a moment and answers, “I don’t feel like I’ve done it yet.”