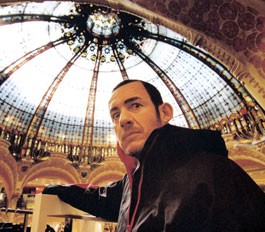 There's a soupçon of Tati, a lot of self-regard in 'Micmacs' caper

HOW GRAND WE ARE THIS MORNING! Dany Boon plays Bazil, an adult orphan who goes adventuring.

A children’s movie for adults, Jean-Pierre Jeunet’s Micmacs concerns a group of derelict junkyard dwellers who go adventuring. They are led by Bazil (Dany Boon), who was unmanned by the loss of his parents: one to a peacekeeping action in Morocco, the other to insanity. He grew to be a dreamy video store clerk so rapt in movies that he could recite all the lines in The Big Sleep.

One day, he is hit by a stray bullet that lodges in his skull, an accident that costs him his job and his home, and leaves him vulnerable to sudden death. At loose ends, Bazil is scooped up by a group of friendly scavengers. They decide to help him expose a pair of competing arms manufacturers, wealthy predators who have been selling weapons throughout Africa.

Like Jacques Tati, the director he most resembles, Jeunet (Amélie, The City of Lost Children) seeks out the old brown Paris of canal bridges, railroad stations and elephantine 1950s factories. He banks on the charm of the cast, and they’re charming in wee doses. Giulietta Masina lookalike Julie Ferrier (doubled by contortionist Julia Gunthel) plays an Elastic Girl who keeps surprising us by unfolding out of nowhere.

As a criminal with a good line of patter, Jean Pierre Marielle has a Hugoesque story of how he escaped capital punishment. (Jeunet makes the mistake of not staging this brush with death so we could see it as it happened.) Yolande Moreau, never to be forgotten as Seraphine, plays “Mama Chow,” adding some maternal sweetness as the den mother of the group, though she soon seems a simperer and nothing but.

Pieces by the kinetic sculptor Gilbert Peyre—works that have some kinship to the art of Sebastopol sculptor Patrick Amiot—charm us just by being there. These tidbits cover up Micmacs‘ tendency to do little but marvel in its own ingenuity. Everyone here has a story of how they ended up discarded: Mama Chow’s tale is that she lost her children at the mirror-maze at the fair. With its many references, borrowed Max Steiner music and tendency to seem like an eerie kid’s matinee, Micmacs also seems to vanish into the movies it reflects.