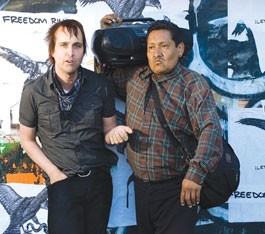 HANGIN’ WITH THE LOCALS: Chuck Prophet recorded his latest in Mexico City; he plays a day labor benefit this weekend.

Chuck Prophet has no real need to play an out-of-the-way Native Sons Hall in a small town whose population could fit into a baseball stadium eight times over. But when a Napa Valley musician called up the San Francisco troubadour and asked if he’d be interested in playing a day labor center benefit in St. Helena to help immigrant workers find jobs and housing, Prophet didn’t hesitate one bit.

“I’m not really a political animal,” he says on the phone from his Duboce Triangle home, “but I always keep my antenna up for things that are totally absurd. And for me, one is the fact that we spend billions of dollars every year trying to build a bigger wall to keep people out of this country. Especially when you’re talking about people coming up from Mexico who are really just trying to provide for their families by cleaning our toilets and babysitting our kids.”

Recording ¡Let Freedom Ring! last year in Mexico City—amid the swine flu outbreak, daily power outages and crashed hard drives—only galvanized Prophet’s stance. The record recalls the venomous chill of the Clash’s London Calling and the working-class uplift of Springsteen’s Darkness on the Edge of Town. He calls it a collection of “political songs for nonpolitical people,” character sketches, in other words, of people living in “raw, anxious times.” With its jerking, slashing guitar chops, opening track “Sonny Liston’s Blues” sets the scene with police lineups, aspirin and tight-lipped fighters.

Prophet had read theories about Liston throwing his bouts with Muhammad Ali, but what consumed him most was how hated the boxer was. “People loved Ali. Well, they learned to hate him, too, actually—’fuckin’ Muslim draft-dodger’—but to me, what was interesting about Sonny Liston is people saw him as a real monster. They called him ‘the Bear.’ And I could see a lot of heart in there that was invisible to other people. With this record, I think Sonny was a great metaphor for the American dream itself. He was part reality and part myth, and that’s what the American dream became.”

Organizing and opening the show is Sean Garvey, a Napa Valley native who grew up working in the family vineyards alongside immigrant workers and gaining an understanding of their plight. “Some of them not having places to stay seemed like an absolute crime,” Garvey says, and thus this weekend’s show is a benefit for Work Connection, a St. Helena program that pairs day laborers with wineries and other employers for fair wages.

The wooden floor of the Native Sons Hall is the perfect setting for what Garvey intends as a rural counterweight to Napa’s gradual embrace of the upscale life. “People don’t remember that this is a farming community,” Garvey says. “It always has been and always will be. In this age of celebrity winemakers and celebrity chefs, I think people lose sight of that.”

“The thing is,” Prophet says, “the tension’s rising all the time. There are a lot of people out of work right now, you can’t get a job. So people start looking around, and they get angry.”