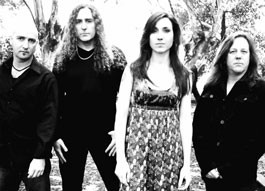 With Luvplanet’s song “Lucky One” getting spins on rock station 97.7-FM the River, their fourth CD Luvolution coming out this fall and upcoming concerts all over the North Bay, the band should soon be a household name. Combining such influences as Rush, Journey, Sheryl Crow and Fleetwood Mac into an eclectic mix of pop, psychedelic, blues and hard rock, Luvplanet’s signature sound with uplifting lyrics in songs like “Believe,” inspires listeners to sing along, dance, and have fun.

Formed in 2003 by Nicole Sutton and Mark McGee, the band has supported acts such as Plain White T’s, Boston, Third Eye Blind, Montrose and Eddie Money. On June 18, they share the bill with Fools for Rowan and Cat McLean at the Last Day Saloon.

Sutton, born in Detroit, lends her seductive, earthy voice and solid rhythm guitar to this tight-knit ensemble. She met McGee in 1999 at a recording studio in Marin County, and both eventually settled in Petaluma where the duo’s natural chemistry became the musical blueprint of the Luvplanet sound. McGee, originally from Alameda, has traveled the world performing as lead guitarist with Gregg Allman and with Vicious Rumors. His diverse influences add an unpredictable extra edge to Luvplanet’s music. Bassist Tommy Sisco and drummer Scott McKenzie provide a solid, driving rhythm to the band’s clever songs; Sisco, also formerly of Vicious Rumors, hails from Stockton. McKenzie and McGee were both members of a revamped version of ’70s prog rockers Starcastle.

Luvplanet’s combination of high-energy rock and moody, reflective love songs creates a vast array of emotions, mostly positive and uplifting. The connection between Sutton and McGee is clear—they play off one another’s catchy guitar riffs while delivering soulful vocal harmonies with lyrical phrases. Sisco and McKenzie seal it all together, providing the foundation with an unspoken yet visible connection. Luvplanet opens for Cat McLean and Fools for Rowan on Friday, June 18, at the Last Day Saloon. 120 Fifth St., Santa Rosa. 8:30pm. $10–$12. 707.545.2343.