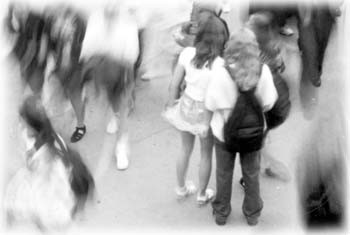 Blur: After the relative calm of elementary school, junior high can present a confusing range of experiences.

Hazing. Harassment. Guns on campus. Welcome to the strange, stressful world of junior high school. What’s a poor kid to do?

JUNIOR HIGH. Two simple words that can strike terror into the heart of an elementary school student–and parents. It’s the first day of school at a typical junior high, and the scene is feverish. Some students stride with confidence, but others hang back uncertainly in classroom doorways, clutching their schoolbags. Others dash blindly like beheaded chickens, in a lost panic, searching for the correct classroom. A few cling to mournful-faced parents in the parking lot, their stomachs swirling with butterflies.

Feeling lost, scared, and ignorant, parted from longtime friends who have been assigned different classes, they undergo trauma that can manifest itself in tears, sickness, and anxiety. New students find they must shift from the familiar and protected nucleus of elementary school into the “big leagues” of a sprawling junior high campus filled with both promise and peril.

That can be coupled with sudden increased responsibility and independence–carrying money, taking care of lunches, preparing gym kits, taking on more homework, changing classrooms, and coping with new teachers–all at a time when kids are dealing with internal and external biological changes.

It can be overwhelming.”Going from elementary school to junior high is one of the biggest transitions there is, even more than going from high school to college,” says Sonoma County Schools Superintendent Tom Crawford. “And the problem is as significant for parents as for students.”

According to Crawford, who was an elementary school principal for 18 years, parents are often loath to let their vulnerable children leave a perceived “safe” environment for a more hostile setting. “Too often, there are so many rumors about junior high–how big and dangerous and how bad the eighth graders are,” explains Crawford. “Parents see it as their child going into a big new world, their baby going into an unprotected environment.”

Still, Crawford adds that a lot of older students want to put the word out to new students that “you better walk softly, or you’ll be in trouble.”

Photo by Eric Reed, courtesy of the Argus Courier

AT JUNIOR HIGH, students may encounter for the first time in their young lives a panoply of real-world problems, everything from sexual harassment to gang violence. Crawford admits that current issues, such as gangs, are serious concerns. “Our society in general is more prone to violence,” Crawford says. “Junior high is a reflection of the community.”

Barbara, a public school instructional aide, says her family experienced teen hostility last year when her soft-spoken, gentle-mannered 12-year-old son became a student at Petaluma Junior High School. “My son was a happy McNear Elementary School student, the top dog in a secure, insular environment,” she explains. “Then, on the first day of junior high school, his status plummeted to the lowest place in a pecking order that is established by preying on the new kids.”

His scary experiences included being smacked and pushed into lockers by a group of “skinhead-type eighth graders,” says Barbara. “Suddenly there was physical confrontation and a level of intimidation which was invisible, but something he could rely on every day.”

While this was going on at school, Barbara says, her son would clam up when he came home. When prompted, however, he would describe the incidents “with little quivering smiles” and try to tell his mom it “wasn’t so bad.”

Within days of starting the new school, the youth became the target of an extortion attempt by a group of 14-year-olds. “A favorite hat was stolen from my son’s backpack. Later, a boy approached him threateningly and said, ‘Pay me $5 and get your hat back or get beaten up,'” Barbara recalls.

It turned out that the intermediary kid also was under threat of being roughed up if he didn’t secure the money. “There was a chain of intimidation,” marvels an astonished Barbara. “It’s like there are these Mafia organizations within junior high.”

Though her son, like many youths, didn’t want to talk about the problem, Barbara says the boy’s “numbed-out,” expressionless face and sudden predatory behavior toward his younger sister clued her in that something was wrong.

“It’s like sexual abuse cases: The children don’t speak directly about having someone hurt them–you have to tune into their behavior, their coping mechanisms, and whether they are lashing out,” says Barbara. Eventually her family solved the problem by discreetly going to school administrators, though she warns protective parents not to go charging into the school office, because that will only brand and humiliate the child.

While boys are picked on physically in junior high, the pattern with girls is that they are intellectually stymied, say some experts. “In junior high, a boy’s status becomes clear, but girls discover their status and begin to go downhill,” says Linda Purrington, mother of a 14-year-old daughter and a member of the Petaluma-based Parents for Title IX, a group that advocates for gender equality in public schools.

Trish Hallenbeck, a local marriage, family, and child counselor, and teacher of a “Parenting in the ’90s” course, agrees. “All of a sudden girls are shut down intellectually. For example, research has shown girls aren’t called on [as often as boys] in math and science classes. They’re derailed, or can be.”

Hallenbeck says girls who were feeling terrific about themselves in sixth grade suddenly become self-conscious and their self-esteem plunges. According to Cheyenne Purrington, 14, who attended Twin Hills Union School in Sebastopol, one friend found the transition so hard to deal with, she eventually developed anorexia. “Now she’s being home schooled,” says Cheyenne.

“Junior High is a big step, if you’re secure and you know who you are and what you want, you really come out well. But if you get in trouble, you drop back and your grades fail,” she adds

Parents must make sure girls are getting all the classes they need, Hallenbeck adds, and parents of all kids should be aware of the necessary requirements to get into state colleges.”

ACCORDING TO EDUCATORS, how students fare at the junior high level can make or break their futures. “If the child has an academically disastrous junior high experience, in most cases recovery is not good,” says Superintendent Crawford. “The more responsible students fare better than those who need more structure.” He adds that this new responsibility comes at an especially difficult time of life when a student is more apt to be worried about what he or she wore yesterday than about what’s on today’s test. While it’s a healthy development for junior high students to begin to exert their individuality and spread their wings, educators agree that parents need to be just as involved with their kids during adolescent and preadolescent years.

“Knowing where your child is, knowing whom they’re involved with at school, knowing the teachers and what the homework assignments are is so valuable,” says Crawford. “Some areas need to be addressed–these kids are neither fish nor fowl; they are searching socially for their identity. They don’t want their parents looking over their shoulder, but it’s just as or more important for parents to be actively involved.”

Hallenbeck echoes that sentiment: “It would be naive of any parent to think their [junior high­aged] child doesn’t have at least some working knowledge of drugs and not to know that the age for having sex is now down to 13.”

She advises parents to help kids become resilient and let them try to solve their own problems first, but to know when to step in if need be. “Keep communication open–children need a strong supportive home environment, as we all do when undergoing huge changes,” she says. “But don’t let lesser issues upset you. Sporting green hair isn’t the end of the world; starting to use drugs could be.”

Many schools prepare ahead of time to make the transition run more smoothly with such activities as principal/counselor visits to elementary schools, student shadow sessions–in which elementary students follow junior high students for a day, then report back–and pre-class orientation sessions.