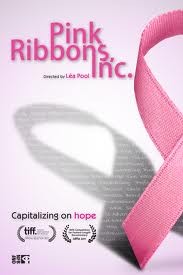 In the early ’90s, Charlotte Haley began a grassroots movement to increase breast-cancer awareness. She attached salmon-colored ribbons to her mailers, a campaign that attracted skin-product giant Estée Lauder. Haley sent away the company’s reps, wanting nothing to do with cause marketing. Estée Lauder responded by creating the pink ribbon, kicking off the co-opting of breast-cancer fundraising by corporations and untrustworthy charities. Such is the story of ‘Pink Ribbons, Inc.,’ a documentary following the money trail of breast-cancer fundraising in the age of the Susan B. Komen / Planned Parenthood drama and middle-school boys flaunting “I Love Boobies” bracelets. The film opens Friday, June 29, at the Christopher B. Smith Rafael Film Center. 1118 Fourth St., San Rafael. $10.50. 415.4554.1222.