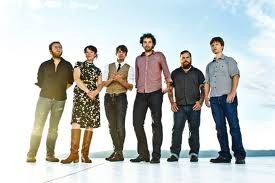 Riding my bike to the Lost Coast last summer, I camped a night in Leggett with an 18-year-old riding his longboard from Seattle to San Diego. Weeks later, after my bike fell apart, I was picked up hitchhiking from Leggett’s Peg House by a giant man—6-foot-8—whose co-pilot was a Chihuahua named Peaches. Needless to say, it gets goofy on the Pacific Coast Route. Portland folksters Blind Pilot should know; they once completed a bike concert tour down the route, on the way playing at Leggett’s Peg House. Though touring by van now (lugging drums in a bike trailer couldn’t have been easy), they headline Friday at the Fillmore in San Francisco. But why drive to the city and pay a bunch of money when you can see them here for free? Blind Pilot plays Thursday, July 5, at KRSH. 3565 Standish Ave., Santa Rosa. Free. 6pm. 707.588.9999.