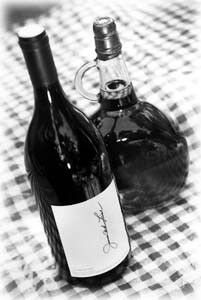 Field of Dreams: The James Arthur Field brand of signature wine is the ideal vino for group feeds.

In appreciation of cheap jug wine

JUG WINES, ALAS, have a reputation only a skosh above former Clinton adviser Dick Morris’ (I mean, he is pond scum), a dismal condition I attribute to three important factors: 1. Zillions of bottles of cheap Chianti wrapped in straw. The Italians shipped them over here by the fleet in the ’50s and ’60s. The wine tasted just like the straw–in fact, it tasted just like the bilge water in those damned ships. What did we ever do to Italy to deserve this? And then, as if the wine wasn’t bad enough already, Italian restaurants across the country used the bottles for candlesticks. Wax drips all over the bottles looked just like multicolored bird droppings and were supposed to tell you the food was “authentic.” Go figure.

2. Guilt by association. Up until fairly recently, virtually all American jug wines were made by the same folks who brought you Boone’s Farm, Annie Green Springs, and Ripple. This isn’t what one would call a viticultural pedigree.

3. A photo published in Rolling Stone in January 1970 of a Hell’s Angel at Altamont happily swigging from a giant jug of Red Mountain burgundy. On the next page, a photo of the same guy beating people over the head with a pool cue. Dinner-party hosts took note of the cheap wine/behavior relationship.

Despite all, I love jug wines. Well actually, I love the idea of jug wines–their unpretentiousness, their common-man forthrightness, their wine-for-calloused-hands soul. When the quality of a good jug wine matches the idea, well, that’s what everyday wine-drinking is all about. And the truth is, humble as jug wines may be, they are the key to getting this country to drink more wine. If the wine industry wants more people to enjoy more wine with more meals (and it surely does), then the way to do it is by producing more and better low-cost jugs, not more and better $20-a-bottle-and-up wines for the elite.

A Jug and Thou: Mass-market wines do well toward serving a full house.

The key to liking them is keeping expectations low. Jugs aren’t Rembrandts, they’re house paint, but you wouldn’t want to cover your garage door with masterpieces, would you? Unfortunately, because jug wines are made from juice that no one wants for something better, and because the wine industry right now is beset with a juice shortage, the quality of jug wines at the moment is, frankly, as low as it’s ever been. Thus, a few shopping rules:

Never buy jug varietals: jug cabernet sauvignon, chardonnay, merlot, etc. Stick with the blends, which are labeled (for a red wine) “table red,” “vintner’s red” or, yes, even burgundy. Turning cab into a jug wine is like putting a BMW engine into a Winnebago. The only possible exceptions to this rule–emphasis on possible–are zinfandel and sauvignon blanc.

Reds tend to be better than whites.

Jim Field up in Healdsburg has dedicated his life to making a better jug wine, which is sort of like dedicating your life to making a better boxer short–but, hey, we need those, too. “Basic” is the descriptive word here: Field’s red is all brick and no filigree. He doesn’t say on his elegantly simple label (which features only his signature) what’s in this wine, but I taste quite a bit of ruby cabernet and maybe some petite sirah. He’s probably got some zin in there, too. Whatever it is, it has the acidity to accompany heavy tomato sauces and ribs gooey with barbecue. This is an ideal wine for group feeds. Another admirable trait: Both Field’s red and white are remarkably consistent from year to year. Two stars. $6.99.

The label says, “We pioneered night harvesting to protect the delicacy and freshness of our grapes and preserve their varietal character.” So how come no one else is doing it? Night or not, this is an above-average jug white showing surprisingly good varietal character. Some call sauvignon blanc “poor man’s chardonnay,” which is not necessarily a slight–this Phillips has the apricot sweetness of a well-balanced sauvignon blanc hiding behind a tart forward presentation. Enjoy a glass while preparing dinner, and then another with dinner. It won’t impress your friends, but it will make your salad taste oh-so-much better. Two and a half stars. $9.75.

So maybe this night thing is spreading. Whenever its grapes are picked, this is a jug red for folks who need something soft and easy at the end of the day. You won’t overexercise your taste buds or tax your brain with this as you might with some fancy varietal, you won’t chop through tannins as you must with some of the cheap big boys, and yet you won’t mistake this for a white. This Valley of the Moon blend is as soft as your favorite chair–fuzzy at the edges, warm in the center. Smells good, too. I think a tasty piece of beef might knock it out with a single punch, but it’d go great with bread and cheese or light pasta. Two stars. $7.49.

This page was designed and created by the Boulevards team.
© 1997 Metro Publishing, Inc.