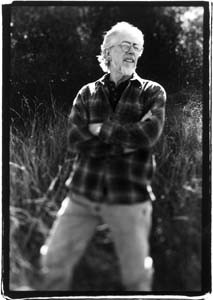 SO THERE IT WAS. Smack dab in the middle of Rolling Stone magazine’s recent 30th anniversary issue: a slick 20-page pull-out section devoted to the mighty musical institution known as the blues.

Perhaps you saw it.

Now, to those with only a beginner’s knowledge of the blues, this Cliff’s Notes treatment is a reasonably acceptable first taste. But to any true blues aficionado, the glaring omissions and glib summations of giant careers are enough to give them … the blues.

Case in point: John Mayall–the revered blues innovator and legendary progenitor of the white-boy British blues–whose band, the Bluesbreakers, has at one time or another contained such names as Mick Fleetwood, Mick Taylor, Peter Green, John McVie, Coco Montoya, and Eric Clapton. The sole Mayall reference in the Stone piece is the inclusion of the classic 1966 record Bluesbreakers–John Mayall with Eric Clapton, the album that launched Clapton’s career yet was great mainly because of Mayall’s magnificently soulful feel for the medium and his sly, non- conformist style of blues songwriting.

The Stone‘s teensy blurb barely even mentions Mayall at all.

“That’s the Rolling Stone for you,” reacts Mayall casually, his lilting Cheshire accent melting into an unconcerned and slightly raspy laugh. “They have typically ignored me my entire career. It pisses me off a little, really; I don’t understand it at all. I have recorded 40 albums. My life and career doesn’t just hang on one certain something I did 25 years ago with Eric Clapton.”

Mayall’s life and career have inspired countless musicians, and not only blues bands: the members of Green Day have repeatedly stated that their earliest inspiration was Mayall and the Bluesbreakers.

“Maybe in another 20 years,” Mayal says, with another cheerful chuckle, “when I’m the oldest living white practitioner of the blues. What I know is that I’ve kept the highest standard I can possibly come up with, in the way of originality and good musicianship and all those things that make for a lasting piece of music.

“I’m just very happy to have been allowed to do that, and of course it’s good to have a legion of worldwide fans who’ve made it possible for me to make a good enough living. I’ve gotten wonderful support on the road all these years, so Rolling Stone or no, I’m really not complaining.”

JOHN MAYALL was born in 1933, in the small town of Macclesfield, England, and grew up amid the turmoil of World War II. As a teenager, an avid student of the piano, he first encountered the blues. In the complete absence of blues players in England at that time, Mayall taught himself to play boogie-woogie, emulating the sounds he picked up from his growing collection of albums from the States.

In college, where he studied graphic arts, Mayall formed his first blues band, playing mainly during lunch breaks for whatever amazed collection of students showed up to listen. After graduation, he found a job as a graphic designer and played music at night. By 1963, at the age of 30, Mayall was no longer able to resist a life devoted to the music that first inspired him; he moved to London, cut his first solo album, and shortly thereafter started a new band: the Bluesbreakers.

By 1968, when he relocated once again–this time to Los Angeles, where he’s lived ever since–Mayall had established himself as the foremost British practitioner of the blues. His innovative arrangements, iconoclastic songwriting, and high, expressive tenor voice all seemed, with each new album, to push the boundaries of the medium, while never straying too far from the identifiable blues sound. His latest album, the strikingly personal Blues for the Lost Days (Silvertone Records), is quite possibly the best of his career. Mayall’s still- surprising songwriting sensibility–his choice of subject matter is unlikely to be found in the songs of many other blues singers–is at work in every single cut, from his grateful celebration of his mother’s love (“One in a Million”) to the autobiographical “All Those Heroes” (a musical list of all the great bluesmen who’ve inspired him) and a pleasantly unexpected historical musing on the terrors of trench warfare during World War I (“The Trenches”).

THE OBJECT of blues music is to be saying something original,” Mayall offers, explaining his tendency to come up with such unexpected themes in his work. “I’m not here to be treading old ground, or to be doing secondhand versions of songs the masters have done before, and can’t be copied anyway.”

Some fear that the pure, original blues sound created by Buddy Guy and the like will soon be lost forever.

“Styles change over time, they’re bound to,” he says, reassuringly. “The blues of the ’20s doesn’t sound much like the electrified blues that came along in the postwar years. The sound shifted with the times. The main thing,” he continues, “is that there’s a continuing line that runs through all the blues, whatever the particular style may be. Sure, we’ll never get another Johnny Lee Hooker, because people of that age and generation are unique. But at the same time there are new artists, great blues players, that are going to be recognized as unique because they don’t sound like anyone else.”

With one last chuckle, John Mayall adds, “And I count myself as one of those.”

John Mayall and the Bluesbreakers will be playing at the Russian River Blues Festival on Saturday, June 6, at Johnson’s Beach in Guerneville. Tickets are available from BASS or by calling 869-4100.