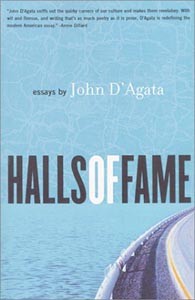 A SPECIAL FORM of creative nonfiction lives in the territory between poetry and essay. These alluring hybrids are meditative, musical, artful, more imagistic than informational. First called lyric essays in 1997, when editor Deborah Tall and associate editor John D’Agata began publishing them in the Seneca Review, these works often challenge our notions of what essays are supposed to look like, what they’re supposed to do.

John D’Agata’s Halls of Fame (Graywolf Press; $24.95) demonstrates the power and experimental nature of the lyric essay. Readers drawn to contemplate the mysteries of Las Vegas, sperm banks, Route 66, the world’s tallest thermometer, or the Flat Earth Society will find plenty of intriguing subject matter in this collection, and some surprising ways of examining it.

D’Agata is something of a mad scientist who is, according to Phillip Lopate, “pushing the envelope of the modern American essay.”

In “Notes toward the Making of a Whole Human Being,” D’Agata uses a periodic sentence to construct a monster as impressive and terrifying as any of Dr. Frankenstein’s. He plays with form, injecting clues about himself and his subjects into unexpected places.

Each essay opens with a door fashioned out of Library of Congress catalog listings. In “Flat Earth Map: An Essay,” his effusive footnotes threaten to bubble over the margins and engulf the text. At other times, D’Agata places key information at a considerable distance from his essays. Don’t pass over “Notes” at the back of the book.

D’Agata knows how to serve up glorious images, such as this unfaltering description of the bus driver conducting a tour from Las Vegas to Hoover Dam in “Round Trip”: “His words emit circles, whip bubbles around our heads. His sentences wrap around the bus and greet themselves in midair. All the way to the dam the bus rumbles inside this cloud, the date slips steadily away, the tour transforms into a silent scratchy film that is slowly flitting backward through frames of older dreams.”

In “Collage History of Art, by Henry Darger,” D’Agata is equally good at grappling with experiences that defy understanding. Henry Darger was a Chicago recluse who lived for 40 years in a room whose window he covered in tinfoil and walls he papered with hundreds of pictures of little girls with their eyes X-ed out.

Two-thirds of the way into D’Agata’s tender yet disturbing portrait of the disenfranchised collage artist, he stops short and writes: “I’m sorry if I misled you into thinking this would be fun. That a paragraph could stand in for Henry Darger’s room. That this essay could be a gallery you could walk through on your own, that you could get to know Henry on a Sunday afternoon. What I meant to say is that Henry never had any guests. I didn’t mean to say apartment, but maybe stanza instead.”

Some readers may find D’Agata confoundingly elusive, a tour guide who refuses to keep his charges company. He often seems intent on erasing his tracks entirely, leaving us to contemplate the blank spaces in the text where his footprints might have been.

There is no question that Halls of Fame remains an intensely private journey. But that can work to our advantage, as in this example: When our host slips off in the section of the title essay called “Western Heritage Museum of Freedom, Oklahoma City, Okalahoma” and leaves us alone with 157 different kinds of barbed wire, he allows us to experience our own wonder and come to our own conclusions.

Each time we ask D’Agata, “What do you mean here?” we hear him reply, “Tell me what you think.”

Susan Bono is the editor of ‘Tiny Lights: A Journal of Personal Essay.’