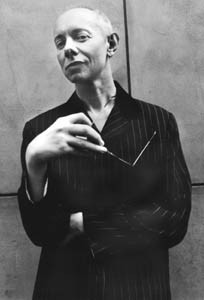 FEW OF TODAY’S musicians have enjoyed a career where they have explored as many different musical styles and settings as Joe Jackson. Over a two-decade span, the New York-based British-born singer/songwriter has touched on punk-edged pop, songs that have been flavored by reggae and Latin music, 1940s-era swing, jazz, classical, and even more of an adult contemporary style of pop. Occasionally, Jackson’s eclecticism has been rewarded commercially. His first CD, 1979’s Look Sharp, spawned the radio-friendly hit song “Is She Really Going Out with Him?” On the other end of the spectrum, his 1982 release Night and Day has become something of his signature album, with that album’s elegant stylings spawning his biggest hit, “Stepping Out,” as well as the popular ballad “Breaking Us in Two.”

His latest CD, Night And Day II (Sony/Classical)–a street-smart snapshot of urban America–is something of a sequel to that earlier album. Jackson, though, feels that if he were starting out in music today, he’d never get the chance to even begin making albums that enabled him to explore such wide-ranging music.

“It has definitely gotten tougher, no question. The only reason I’m still actually making records and getting any kind of attention at all is because I sort of got my foot in the door awhile ago when things were different. Everything has changed so much,” says Jackson, who cites the British pop personified by the Beatles and the classical music of Beethoven as his two biggest influences. “The more eclectic creativity that I aspire to–once again, the Beethoven and the Beatles–it’s being squashed by big corporations. That’s happening all over in all different fields. I mean, I saw it in publishing when I tried to get my book [1999’s somewhat autobiographical A Cure for Gravity] published. Publishing is the same thing. People say ‘Look, this is a great book. If you’d brought it to us five years ago there’s no question we would have published it. But we’re not going to publish it now because of the way things are, because we’re under so much pressure to produce large short-term profit.’

“That’s what’s going on in the industry. So people who are eclectic, hard to categorize, and so on are just . . . it’s very, very difficult.”

AS IT IS, Jackson remains a vibrant presence on the music scene 21 years after Look Sharp put him on the map with its diverse brand of punkish guitar pop. The 46-year-old native of Portsmouth, England, followed that LP with another album of punchy guitar pop, I’m the Man, before his artistic sense of adventure really began to show. His 1980 album, Beat Crazy, brought a variety of rhythms–reggae being a predominant tempo–into his style. Then in 1981 came Jumpin’ Jive, a CD influenced by 1940s-era swing. Following Night and Day, Jackson explored a jazzier vein once again on Body & Soul before returning to more of a pop-based sound on Big World.

The musical carousel continued. Blaze of Glory (1989), which Jackson considers one of his finest CDs, synthesized Jackson’s pop, jazz, and classical influences into a cohesive whole. Laughter and Lust (1991)tended to be streamlined rock. Later albums, such as 1997’s Heaven and Hell and last year’s Symphony No. 1–which won a Grammy Award in February as the Best Pop Instrumental Album–have shown more of a classical influence.

Considering the variety in his albums, it’s understandable that some people view Jackson as an artist who has played stylistic hopscotch, moving from one style to the next with each album. Jackson himself thinks that perception is far off base. He says his albums have never been limited to just one style, and he sees a strong thread connecting all of the records he has made.

“I see them as being consistently eclectic, but no two eclectics sound the same,” he says. “Eclectic seems to make some people think that it’s not authentic, that there isn’t an authentic voice there. But a lot of the greatest artists in history were very eclectic and were just all over the place and broke all the rules and everything else, including once again Beethoven and the Beatles. But I think that the thread going through it is just me. It’s my personality and my voice and putting different elements together. I think you just see different sides of it on different albums. But you know, people like to make out that I did a jazz album and then a salsa album, then classical. I just think when people read this stuff, no wonder they’re turned off.”

While some might consider Jackson’s latest album, the aforementioned Night And Day II, a shrewd–if belated–commercial move to tie his new CD to the popular 1982 album, Jackson didn’t have a preconceived plan for the new record. “I know people keep asking me, ‘Why did you decide to do Night and Day II?‘ and I never decide to do anything,” Jackson said. “When I start a project I have no idea where it’s going to go.”

The only notion Jackson had going into the project involved a thematic idea.

“There was sort of a vague idea that I wanted to write about New York. I didn’t even know if it could be a whole album or what,” he adds.

The New York theme, as it began to play out in his writing, drew Jackson back to the original Night and Day. Many songs from that 1982 album were centered around the impressions a newcomer to New York had about the city. Just as important, Jackson began to realize his new material also had musical similarities to the songs on the first Night and Day album.

“There’s a certain sound world. They inhabit the same sound world,” Jackson says. “They’re both based around my keyboard playing also with percussion and strings. I think they both draw on a lot of different rhythms, including Latin rhythms. I think that there’s just a similar kind of language. I don’t know if I can define it much better than that. I think Night and Day II is richer and kind of fuller, a bigger picture.”

INDEED, the finished version of Night and Day II strongly echoes its predecessor. And as in that first album, the songs here feel like a series of snapshots of life in New York. This time, they’re told through the eyes of a variety of characters.

“Hell of a Town” captures the darker side that comes with living in a dynamic city. “Stranger than You” reflects the diversity of New York through its references to a kaleidoscope of misfits and offbeat characters. “Dear Mom” finds Jackson spinning a tale of an embittered teenage runaway.

On several songs Jackson recruited guest vocalists to portray his stories. Marianne Faithfull effectively captures the world-weary tone of a 50-something woman feeling alone in the harsh big city. Iranian singer Sussan Deyhim puts the proper accent on “Why,” a song about an immigrant trying to adjust to her strange new surroundings. Drag queen Dale DeVere does an effective turn bringing to life the hardened edge of a transgender hooker working the city’s meatpacking district in the song “Glamour and Pain.”

ONE NOTABLE contrast between the two Night and Day albums is that the new CD is written from the perspective of someone who has been in New York for a decade and a half, as opposed to someone who was a newcomer to the city. Yet, Jackson thinks his feelings about New York City haven’t changed much over the years.

“I think I know it better. I know more sides and so on,” he said. “But I’ve really got pretty much the same attitude to what I had in the first place. I still find it very romantic and very glamorous. And I also am still aware of the sort of dark, scary side that is also there. I tried to put both of those sides into the project. So basically my feeling hasn’t really changed. It’s kind of like when you meet someone and you have a first impression, but then you get to know a lot of different sides to them. But then 20 years later you realize that your first impressions were nevertheless pretty accurate. I think that’s the way I feel about New York. And I still love it and sometimes I hate it.

“But that’s really part of the same thing, I think.”