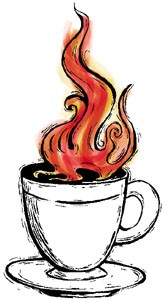 14 years of Java Jive comes to Page on Stage

It all began when we were in a cafe in—get this—1993, wondering what the heck everyone around us was scribbling on about. Seated at counters and small tables, sprawled on benches and cross-legged on the floor, writers were humming away, marking up notebooks and unaware that such marvels as laptop computers soon awaited them. What are you writing about, we demanded. As it turns out, you were mostly writing about sex, which makes perfect sense to us.

So began the Bohemian‘s—we were then known as the Sonoma County Independent—annual Java Jive writing contest. (This year’s contest is scheduled to commence Sept. 26.) In honor of the North Bay’s luminous literary legacy, the Page on Stage reading this month—recorded for rebroadcast on KRCB 91.1-FM—salutes Java Jive with actors reading from the works that we’ve published over the years. It’s a synergy thing and we’re more than a little thrilled.

If you’ve ever been published in our Java Jive issue, you should be more than a little thrilled, too. At press time, we here in the Old Media have no idea what the lineup is for the Best of Java Jive, slated for Wednesday, Sept. 5, at the Glaser Center, 547 Mendocino Ave., Santa Rosa. 8pm. $5. 707.568.5381. See you there!