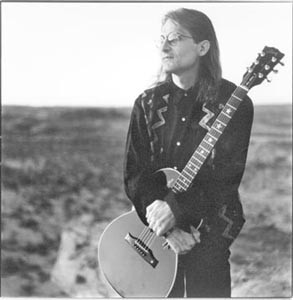 By Greg Cahill and Alan Sculley

“I’M A DUAL personality,” says singer-songwriter Jimmie Dale Gilmore with a quiet laugh. “You know, I’m sort of the new kid on the block–enjoying a newfound success–and I’m the jaded veteran. I guess you could say I’m watching it unfold through both sets of eyes.”

It’s an unusual situation, to be sure.

Nearly 35 years ago, Gilmore’s now-defunct band, the legendary Flatlanders, helped pave the way for the retro- and alt-country sound with an innovative blend of country, folk, blues, and rock styles. Shunned by the Nashville establishment, Texas troubadour Gilmore has long been a critics’ darling. In 1991, Rolling Stone selected him as country artist of the year in its prestigious annual rock critics’ poll. And USA Today–and another 100 or so newspapers–named his 1991 major label debut, After Awhile (Elektra), country album of the year.

Gilmore’s two most recent CDs have been viewed as if they came from two different worlds. At least that seems to be the consensus in the music press and among many of his fans. Braver New World, released in 1996, was widely viewed as a major departure for Gilmore. Produced by T-Bone Burnett, that album had an edgy feel and experimented liberally with instrumentation and sonics, frequently featuring chiming electric guitars, horns, and echoed background tones. It also included some of the rawest, hardest-rocking performances Gilmore had ever committed to tape on songs like “Black Snake Moan” and “Outside the Lines.”

By contrast, his newly released One Endless Night is being touted as a classic Gilmore album. The disc is largely acoustic in its sound and more traditional in its approach, and it highlights more of the melodic folk and country side of Gilmore’s music. It draws material from such diverse sources as the late country folkster Townes Van Zandt, rocker John Hiatt (a stunning version of “Your Love Is My Rest”), the Grateful Dead (“Ripple”), and even Kurt Weill and Bertolt Brecht (a radically transformed take on “Mack The Knife”).

Gilmore, however, says it would be a mistake to consider the two CDs polar opposites. He used a description of Buddy Miller, guitarist for the Emmy Lou Harris band and the producer of One Endless Night, to help put the similarities between his two most recent CDs into perspective.

“What I noticed was that Buddy truly loves the real traditional kind of romantic American music,” Gilmore says. “But at the same time, he’s a real rock ‘n’ roller. He has a flair for the really edgy kind of music. So to me, if it happens that a record or even a song, a particular song, falls a little further one way or the other on that spectrum, it’s still within the compass of what appeals to me.

FAME AND FORTUNE may have proved elusive over the years, but Gilmore hasn’t complained about the attention–though, he admits, being a critics’ darling is a mixed blessing.

“It could be bad if it creates giant expectations that they don’t figure I measure up to next time around, which is always possible,” he says. “But I never let that affect what I’m doing, because all the stuff I’ve done in the past was a result of relentlessly sticking to my guns and doing what I know I’m capable of.”

Certainly, Gilmore’s distinctive sound is an acquired taste. Yet those who venture beyond his affected old-timey vocals–a plaintive, nasal twang that harks back to his west Texas roots–will find some powerful songs and performances.

Raised in Lubbock, Texas (home of Buddy Holly), he grew up in a region that has spawned such renegade country acts as Joe Ely, Nanci Griffith, and Butch Hancock. In that neck of the woods, folks often point to a rash of UFO sightings–the notorious “Lubbock lights”–to explain the presence of so many cosmic cowboys and cowgirls.

In 1971, Gilmore, Ely, and Hancock formed the Flatlanders, a band that combined modern lyrics and traditional instrumentation (including a musical saw). Their 1972 recording (released only on eight-track tape) quickly vanished but became an instant cult classic. (In 1990, Rounder Records reissued the album as More a Legend than a Band.) A thousand honky-tonks later, Gilmore resurfaced in the mid-’80s on the Oakland-based Hightone label.

But it was After Awhile, part of the Elektra/Nonesuch’s short-lived five-part “American Explorer” series, that rekindled Gilmore’s solo career.

“I felt flattered to be included and almost like I didn’t really belong there,” he says. “But it sure has been a great stepping stone.”

Indeed, the acclaim led to a five- album deal with Elektra. “You know, I’d just like to make enough money to keep a real good band going,” Gilmore says. “It’s not like I have anything against money, but it’s never been the real driving force in my life–although I wouldn’t mind finding a money tree.

“But in terms of artistic integrity, money allows me to keep a band together, write songs, and record–and that pretty much ties all my ambitions together.”