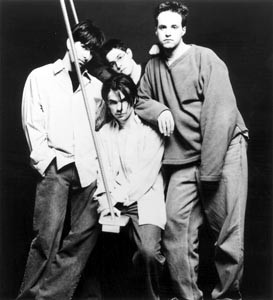 Much Afraid, and performing at LBC next week.

IT APPEARS that Jars of Clay didn’t have that much to fear after all. The Nashville-based foursome–which in 1996 became one of the few Christian groups to cross over into the music mainstream when their self-titled debut CD went platinum and its single, “Flood,” broke into the alternative radio charts–had named their newly released second CD Much Afraid.

The title was a direct reflection of the uneasiness the band felt in the time leading up to recording sessions for the disc.

Keyboardist Charlie Lowell admits that the thought of following up the band’s popular 1995 debut had generated plenty of pressure for him and his bandmates (singer Dan Haseltine, guitarist Stephen Mason, and guitarist Matthew Odmark). Some of the expectations came from the group’s record label, Silvertone, which hoped for a second straight million-selling CD from the band. “I think a lot of it was kind of hearing people say, ‘What are you going to do, or what are you going to change, or how are you going to match the first record? How will you approach writing?'” Lowell recalls. “That’s when I think we started feeling some of the pressures.”

The band members were also acutely aware that fans from the Christian music market were also watching to see how Jars of Clay would respond to their crossover success. As the group was one of the first Christian acts to crack the mainstream pop charts, some Christian fans worried that its members would alter their music and message to build on their success.

“So there were a lot of questions, and we would kind of answer them by going, ‘Wait and get the record, because we’re excited about it and we think you’ll enjoy it.'”

At this point, Jars of Clay appear to have risen to the challenge. Much Afraid has sold respectably, while the first single, “Crazy Times,” gave the group the follow-up single new bands need to avoid any perception of a sophomore slump. But even without the success of the single, Lowell says, he would have felt good about the new CD.

“I definitely feel like it represents much more accurately where we are now,” he adds.

REFLECTING on the band’s achievements in the mainstream pop market, Lowell offers a few thoughts on why Jars of Clay have crossed over while so many of their peers remain limited to the Christian music market. “I think a little of it was the music and kind of the uniqueness of the acoustic guitars and the tape loops, which isn’t quite so unique these days,” Lowell says. “And the harmonies were kind of a signature sound, I guess, that stood out.

“But I think maybe lyrically that had a bit more to do with it. Dan Haseltine does the bulk of the lyric writing, probably 90 to 95 percent of it. I think he has a very human perspective that he writes from. And I think he does a really good job of incorporating our faith and letting that show itself naturally instead of forcing it or saying this song’s going to say this about Christianity or of the personal Jesus. I think he really reflects what we want to do, which is to not go into things having an agenda or not feel like we’re going to change the world or the alternative market.

“I mean, I think the only thing we want to do really is express how our faith affects us when we look at certain issues. And then other than that, just to love people we meet on the road and come in contact with, and hopefully bridge some walls between the Christian industry, or the church, and the mainstream culture.

“We see a lot of kind of people who’ve had bad experiences with the church, or have been abused, or maybe they’ve only experienced the televangelists or something like that,” Lowell concludes. “When they learn that we’re normal people and that we like a lot of the same artists that they do, and that we’re not there to judge them or to try to change who they are, they seem to relax a lot more.”