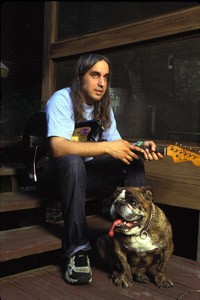 Different Kind of Jewel: J Mascis was made to love from afar.

Why I Didn’t Talk to J

If things had played out differently, you’d be reading a Jewel interview in this space right now. That’s right, we turned down an interview with Jewel–you know, Jewel, who sang that one song about being sad and wearing pajamas. Um . . . “You Were Meant for Me”? Yeah.

Instead, you get a complete lack of an interview with J Mascis, late of the highly influential proto-grunge band Dinosaur Jr., currently ringleader of J Mascis and the Fog and occasionally busting out a solo thingy every now and then.

J, whose long, flowing “Cousin It” locks have turned a shade or two grayer since Dinosaur Jr.’s late-’80s-early-’90s heyday, is famously laconic in interviews. It’s almost as if he reserves his expressiveness for his soaring guitar solos, which tread a blissfully fine line between easygoing and vengefully shredding.

Interviewing Jewel would be comparatively easy. I saw her on David Letterman once, and she seemed pretty nice. The problem is that no one I talked to cared. At a recent party, I tried to impress everyone with my big-time rock-journalist connections. “Say,” I slyly dropped, “I might be interviewing Jewel.”

The invariable response was, “Why?”

Someone, though, has to be a fan of VH1’s Alaskan queen of Lilith Fair Lite: tickets for her solo acoustic show at the Luther Burbank Center run $65 to $125 a pop. To those people, the chance to interview Jewel might be a big honking deal.

Which is exactly how I feel about interviewing J Mascis, who appears June 7 at the Mystic Theatre. Except that I’m not doing that, either.

The guy was made to love from afar. His typical noncommittal response in most printed interviews runs something like, “I’m not sure, whatever riffs come out” or “I just kind of play guitar and wait for something to come.” He seems like a much cooler person to run into in the airport, in which case I could try and impress a whole bunch of people at another party by saying, “I saw J Mascis the other day!”

No matter. Enough people know J Mascis is God that a number of websites trade bootlegs of his live shows and keep track of the set lists–and it’s not all because they are unequivocally devoted to J’s back catalogue of Dinosaur Jr. nuggets.

Formed in Amherst, Mass., in the early ’80s from the disparate ends of quasi hardcore band Deep Wound, Dinosaur (the Jr. came later) originally featured J and Lou Barlow. Eventually, the bad mojo between the two prompted Barlow’s departure in 1989, Barlow pouring the resulting resentment into all of those tasty manic-depressive songs that came with his successive band, Sebadoh.

Driven by J’s nasal, affably indifferent vocals and free-flowing indie-jam guitar solos, Dinosaur Jr. released a string of albums throughout the ’90s and left a mighty wake in the alternative-rock underground. There’s a terrific bit in Dave Markey’s documentary 1991: The Year Punk Broke where a zillion Europeans sing along in complete rapture to the slacker love anthem “Freak Scene,” as Dinosaur Jr. plays one of those massive outdoor festivals. It’s a rare snippet of a transcendent rock moment, the kind that every rabid fan seeks in every live show of every band she adores.

And that is why I never, ever want to speak to J Mascis in a journalistic context. I want to love him for his gross long hair and slovenly T-shirts and big, weird sneakers and all of the rumors that he dated Uma Thurman (not true!) and the chance of experiencing my own sliver of rock transcendence.

The dude is still at it, plugging away at live shows and assorted affiliations, jamming with members of the Stooges, skydiving, playing the drummer of a band in filmmaker Allison Anders’ current project, smoking pot with pal Kevin Shields of My Bloody Valentine. J’s albums since 2000 haven’t presented us with anything too new, but maybe that’s not the point. He’s here, which is enough.

And I bet that’s how Jewel’s fans feel, too.