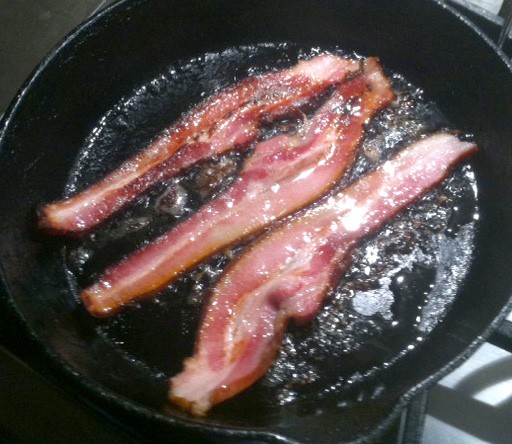 You know you live in a great place when there is an abundance of local bacon to choose from. There’s Victorian Farmstead and Black Pig Meat Co. from Sebastopol. Napa has its superb Fatted Calf bacon. In the super-ultra-premium category, there’s Mangalitsa pork from Windsor’s Winkler Wooly Pigs.

My new favorite is the excellent bacon from Santa Rosa’s one-year-old Sonoma County Meat Co. The thick-sliced bacon sells for $6.99 a pound in their shop and a bit more elsewhere, and it’s an example of restraint, not a word generally associated with bacon. The folks at SCMC know that good pork belly is best when it isn’t overpowered by too much smoke flavor or salt. I tried the “classic” bacon, slow-cured and smoked over hickory. It’s lightly seasoned with maple sugar and red pepper flakes, but it’s the sweet pork flavor that comes through. There are a few other secret ingredients, but they’re not giving them away. Whatever it is, it’s great stuff. They also make a delicious-sounding honey-lavender bacon.

In the pan, the bacon yields a fair amount of water. Cook it slowly on medium heat to get it nice and crisp but to prevent the sugars from burning. Sonoma County Meat Co.’s bacon is available at Oliver’ Markets, Big John’s Market in Healdsburg, the the West End Farmers Market and SCMC’s retail shop at 35 Sebastopol Ave., Santa Rosa. 707.521.0121. www.sonomacountymeatco.com