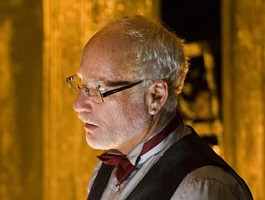 ‘At this point in our career, we’ve compiled thousands of thousands of pages of tips on travel, so we know what we’re talking about when it comes to, you know, travel.”

So states the short, bearded gentleman known to quizzical listeners of public radio as Karl, one half of the mysterious conversational duo known as Karl and Carl, who for over a decade have appeared on the quirky syndicated West Coast Live radio show. Employing a patented, overlapping, back-and-forth, slightly contradictory style of delivery, they regularly show up alongside host Sedge Thompson in a goofy segment titled “Travel Tips with Karl and Carl.”

This evening, both Karl and Carl–the latter clean-shaven and twinkly, yet slightly severe, like a jovial undertaker–are perusing their menus at a corner table at San Francisco’s Amici’s pizzeria on Union Street, right down the block from where we’ve just seen the new movie Poseidon. The film stars Kurt Russell, Josh Lucas and Richard Dreyfuss in a remake of the classic B-movie about a vacation cruise gone terribly wrong after the boat is turned upside down by a 500-foot-high “rogue wave.” With the movie over, we’ve elected to discuss it over a pizza.

“Exactly,” nods Karl appreciatively. “And the tip that most applies to this movie, I think it’s tip number four hundred and–“

“–eighty-seven, is really a very simple tip: Don’t travel at all.”

The waiter comes to take our order: a pepperoni and mushroom with onions and extra cheese. Karl temporarily baffles the waiter by asking if the pizza could possibly be delivered to our table.

“You know who would have really loved to have gotten a hot Amici’s pizza delivered right to their table?” asks Karl. “The people on the Poseidon about three hours after it got flipped over by the tidal wave.”

“Oh, man,” nods Carl in response. “Yeah, pizza would have been good right around then, because, just before the tidal wave hit, it didn’t look like any of them were eating very much. They were too busy gambling–“

“–and having intense father-daughter crises–“

“–and in the case of Richard Dreyfuss, ordering five-thousand-dollar bottles of wine, making weepy comments about an ex-lover who won’t return his calls on New Year’s Eve, tossing his cell phone overboard and then getting ready to throw himself overboard after the phone before noticing that a giant rogue wave is about to slam into the boat.

“Anyway, pizza would have been good.”

The whole conversation goes on like this. At one point, Carl and Karl reveal that their most important travel tip, to simply “be prepared,” is best exemplified in their practice of rehearsing for any Poseidon-like drinking and gambling that might occur during a trip.

“You know what bothered me about this movie?” asks Carl. “Whenever Karl and I have been on a cruise like this one, a cruise where something goes terribly amiss–“

“–maybe something going wrong with the flight plan–“

“–there’s always the moment where you are offered a fifty-dollar-off coupon on your next cruise. I think the least the Poseidon people could have done was offer the survivors some sort of–“

“–rebate, or something like that, and there should have been somebody right there at the end–“

“–some sort of customer-service representative–“

“–an upgrade of some sort!” Carl says, rapping his hand on the table. “Is that too much to ask? Maybe an upgrade to the next class of cabin or something, or–“

“–Exactly!” concludes Karl. “But not on the ship that just sank to bottom of the ocean, preferably. Upgrades are always welcome after surviving a maritime disaster, right Carl? And coupons.”

‘West Coast Live’ can be heard Saturday mornings from 10am to Noon on KRCB 91.1-FM or KALW 91.7-FM. Karl and Carl are widely believed to be played by Geoff Bolt and Michael O’Brian.