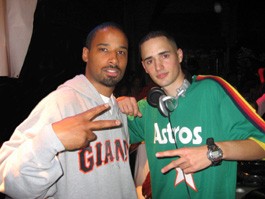 If importance is dictated by shaping the cultural landscape, and if success is determined not only by financial reward but by community enrichment, then by far the most important and successful hip-hop events in the North Bay right now are revolving around one golden phrase: Super Hyphy.

Each month, Super Hyphy concerts attract thousands of rabid hip-hop fans, mostly teenagers, who pack themselves like sardines to dance, scream, hang out, instant-message each other and show love for their own area. Super Hyphy’s history-making lineups exclusively feature Bay Area rappers, showcasing tomorrow’s emerging stars today. From day one, the all-ages, no-alcohol events have nearly always sold out, making it the show not to miss for hip-hop in the North Bay.

As a fan, I have been to tons of hip-hop shows, and in my line of work, I have met many hip-hop promoters. Most of them are motivated by ego and profit. None has so instantly displayed a spirit of camaraderie and an overall good heart as DJ Amen, aka Adam Giacomini, and D-Sharpe, aka Daniel Gelotte, evident in the reasons they give for promoting Super Hyphy shows.

“It’s for the kids to have something to do and for the artists to have a platform to promote their music,” Giacomini says. “I just feel like, man, when I was a kid I remember seeing everyone from Run DMC to the Sugarhill Gang at the Phoenix, and that was always the coolest thing to me, that I could walk down the street and see Run DMC. Who would’ve ever thought that they would be in Petaluma?

“So nowadays,” the 23-year-old DJ continues, “we give it back once a month, so these kids continuously have something to do that’s positive, and somewhere to put their energy that’s good and consistent.”

These days, the wildfire term “hyphy”–used to loosely describe Bay Area rap and the street culture surrounding it–is buzzed about everywhere, dissected in the pages of national newspapers and analyzed by critics desperate to grasp the commotion. Accordingly, it’s become a valuable brand name which Gelotte and Giacomini got in on the ground floor of, though their plucky marketing was born purely of happenstance.

“The only reason we called the first one Super Hyphy,” Gelotte explains, “was because Keak Da Sneak did the show, and Keak’s song was ‘Super Hyphy,'” he says. “So we were, like, ‘Yeah, that kinda goes together.'”

In fact, the first Super Hyphy wasn’t even initially planned by Giacomini and Gelotte. That honor would fall to the late KRSH 95.9-FM DJ Doug Smith, who met the two through their then-radio show, a Bay Area hip-hop program called Street Beats, and expressed interest in promoting a rap concert. “He got in touch with me, and he was, like, ‘Can you put it together?'” Gelotte says, recalling Smith’s enthusiasm. “So I started working on it, and then Doug got into a really bad motorcycle accident and died.”

Right then and there, Gelotte and Giacomini decided to carry on Smith’s vision, and the two took a crash course in concert promotion, dealing directly with the artists and assembling a street team for flyers and word-of-mouth. On the night of the show, “we had no idea what was gonna happen,” Gelotte recalls, a faraway nervousness creeping into his voice. “But then all of a sudden it was packed!”

The stage on that first night was full as well; by my count, 38 people filled the stage at the end of the show, singing along, aping for the cameras and dancing wildly in a free-for-all celebration. And though every one of the performers offered dedications to the late Mac Dre, a new, reborn youth explosion was happening in his wake. The spirit in the air felt like a bursting dam, as people reveled in an outlet for something that had been building up without a release valve for too long.

Five months later, Super Hyphy featured E-40, the 38-year-old Ambassador of the Bay whose latest smash-hit album, My Ghetto Report Card, had yet to be released. The hype was on full tilt, and E-40 himself was dynamic and electrifying, again inviting a flood of people onto the stage to act out the dread-shaking and thizz-facing of his hit single, “Tell Me When to Go.”

“That was the first time I realized what was really going on with the movement,” exclaims Giacomini. “It was just incredible.”

The next month, Super Hyphy booked another legend: Too $hort. As if flying the Bay Area native in from Atlanta and arranging a limousine pickup in Oakland wasn’t stress enough, Gelotte remembers when he saw some squad cars pulling up outside the show. “I’m, like, ‘Here comes the cops, they’re gonna start in on us,'” he says, knowing full well Too $hort’s notorious reputation. “But instead, they were, like, ‘Hey, is Too $hort here yet? ‘Cause I really wanna meet him when he gets here!'”

Both Gelotte and Giacomini have been living and breathing hip-hop for years. Gelotte talks about seeing Whodini and watching Home Turf like it was yesterday, and has released several albums for the group 51.50. Giacomini tells me the first hip-hop album he ever bought was Mecca and the Soul Brother by New York duo Pete Rock and C. L. Smooth, “and I did my history from there,” he says, “all the way back to the Egyptian Lover.”

Giacomini’s room is full of records; he sits and stands on stray piles of vinyl. I’m guessing he probably sleeps on them, too. What space remains is cluttered with personal memorabilia: an autographed dedication from Mos Def; old graffiti murals from eighth grade; a Biz Markie rapping clock; a photo of himself with his idol, Jam Master Jay. When he opens the closet to reveal another wall of records, and I ask him where he keeps his clothes, he stares back at me and blankly asks, “Clothes?”

It’s dedication like this that helps make Super Hyphy shows so successful. Unlike a lot of other rap promoters, Gelotte and Giacomini are genuine products of their culture, and they clearly enjoy spreading the love. “I think you can feel the difference,” says Gelotte of the Bay Area Super Hyphy vibe. “When you come to our show, it’s like down-home cookin’. When you go to their show, it’s fast food.

“The fact that these artists are so well-known, their music is so good, but yet they’re still in this area, makes it great for everyone,” he adds, confidently. “We’re just blessed to be living here.”