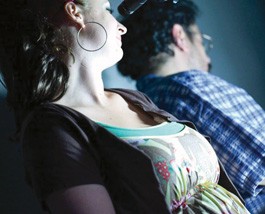 Can a duo function as an orchestra? The Vespertine Orchestra thinks so. At the core of this Sonoma Countybased group are two music educators, Sadie Sonntag (vocals and keyboards) and Jesus Contreras (guitar, keyboards and programming), who teaches music composition and technology at SSU. They describe their music as an “open platform” that includes varying voices and instruments. “Orchestration and arranging are not a problem,” he notes of the duo’s shared classical training. “We can get it all right on paper. If we need to add an entire brass section for a gig, we can do that pretty quickly.” Sonntag, a vocal and piano instructor in local after-school programs, notes that “the Vespertine Orchestra is meant to be expandable and collapsible, to invite in guest artists, so that we can play with another classical singer or a string group or a rock group or have more electronics.”

The Vespertine Orchestra shares roots with the Vespertine Circus, an Oakland-based troupe that performs an array of traditional exotic circus routines. When the Circus began performing last year, the Vespertine Orchestra was added to improvise dramatic, freeform music, emphasizing the tensions of theatrical energy. Colorful aerial tricks, for example, may demand “a really whimsical antique music-box sound,” Sonntag says. Once, accompanying contortionist Jubilee Mia, she improvised the sound effect of a bug, “like ‘zzzzzzzzz,’ like a sound he was chasing around, and he was interacting with that sound.”

Apart from the Circus, the Vespertine Orchestra performs original songs mixing modern folk music with a backdrop of 20th-century classical minimalism. The duo’s latest show is billed as Vespertine Dreams, and integrated into the set will also be Due Zighi Baci, with the “Eurocafe” music of tenor Michael Van Why and accordionist Sherri Crawford; Jonqui Albin, who paints live art to the music; and Gypsy-rock accordionist JD Limelight. Such inclusiveness defines the Vespertine Orchestra; Sonntag says, “We want this orchestra to be able to say, ‘Sure!'”