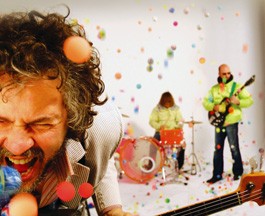 Get out those giant inflatable space balls and nun puppets covered in blood—the Flaming Lips have been confirmed as headliners at this year’s Harmony Fetsival in Santa Rosa, running June 1012 in Santa Rosa. Also announced as part of the lineup: Edward Sharpe and the Magnetic Zeroes, whose hit “Home” shows no sign of fading; Grace Potter and the Nocturnals, fresh from a rare small show at the Hopmonk Tavern earlier this week; yoga darling Krishna Das; and Americana heroes Railroad Earth. More artists are to be announced in the coming weeks at www.harmonyfestival.com.

In more festival news, the Sonoma Jazz+ Festival has announced its headliners—who, as many are quick to point out, would never be filed in the “jazz” section of any record store or iTunes playlist. Still, a sold-out crowd is expected for Sheryl Crow (May 21), John Fogerty (May 20) and the Gipsy Kings (May 22), all under the big tent. Opening acts and side-stage artists will be announced soon. As is the fest’s custom, tickets for Sonoma residents go on sale one day early, Feb. 14, while tourists have to wait until Feb. 15 at www.sonomajazz.org.