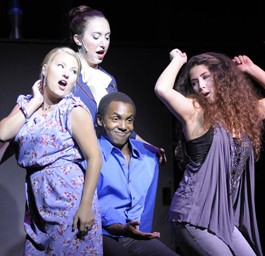 Sondheim's songs the star at SRT

Stephen Sondheim’s 1970 musical Company may be one of the best-known shows that few people have actually seen. Its most famous song, the addictively bouncy “Side by Side,” has come to stand as one of Sondheim’s most-beloved tunes—a popular Broadway stage revue of the composer’s music was actually titled Side by Side by Sondheim—and yet many would be incapable of identifying which musical “Side by Side” originally came from.

For those who’ve never had the opportunity to hear the songs together with the actual play, Summer Repertory Theater is now staging the 41-year-old musical. Of course, 41 years of buildup is bound to produce some disappointment, and ultimately the show as a whole does seem less than the sum of its musical parts. Essentially plotless, with its most irritating song, “Bobby,” repeated endlessly throughout the proceedings, Company is a series of vignettes about struggling marriages strung together as 35-year-old Bobby (Nathan C. Crocker), questioning his own aversion to marriage, visits his married friends, one unhappy couple at a time.

Little actually happens in Company, and the lovely song “Being Alive” turns out to be a less successful climax to Bobby’s angsty quest than I’d hoped. With a generally weak book by George Furth, the show is all about the songs, and under the musical direction of Alex Wise, the music in the SRT production is the real power source of the show. The cast, though noticeably tired early on in the run, all have fine voices, and many find truly entertaining ways to infuse their songs with eccentric, character-driven life.

Highlights include Cody Craven’s light and lovely take on the wistful “Sorry-Grateful,” in which Bobby’s friend Harry describes marriage as a bittersweet collision of conflicting emotions; “Getting Married Today,” in which Amy (sung with delightfully supersonic mania by Sarah Crane) tries to talk herself out of marrying Paul; the aforementioned “Side by Side,” in which Crocker is joined by the entire cast in a clever celebration of friendship; and most memorably, “The Ladies Who Lunch,” a raw, very funny dissection of female survival techniques, magnificently sung by Tiffany Denise Hobbs, nearly taking the roof off the theater with her no-holds-barred ferocity.

Ultimately, it is the performances of the committed and talented cast, backed by a solid orchestra, that make this Company worth keeping.