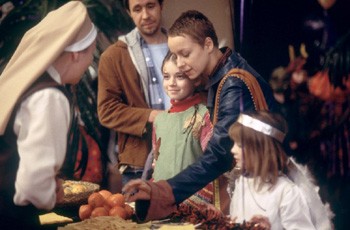 Suffering Succotash: In ‘In America,’ a heartwarming tale to rival any Christmas fodder, an Irish couple find the strength to continue after the death of their son.

Coming to ‘In America’

Don Novello on fearing Christmas, the joy of action figures, and the difficulty of finding a good movie close to home

Folding open my newspaper to the movie listings, I cradle the telephone against my shoulder and scan the page before me. Thanksgiving has just passed and the theaters are crammed with product, the first wave of the big holiday releases. Most of them look awful.

“How about Bad Santa?” I suggest. “Billy Bob Thornton as an unsavory department store Kris Kringle. They say it’s the Shakes the Clown of alcoholic Santa Claus movies.”

There is a long, uncomfortable pause on the other end of the line, followed by the delay-tactic clearing of a reluctant throat. Eventually, Don Novello–comedian, actor, author, sociopolitical prankster, and choosy consumer of motion pictures–speaks up.

“Yeah, you know, I’d rather we pick a movie other than that,” he says, his voice betraying a hint of Father Guido Sarducci’s famous Italian accent, acquired by Novello after 40 years of playing the famous Vatican gossip columnist on television shows like the Smothers Brothers Comedy Hour and Saturday Night Live, and in comedy clubs around the world. “Bad Santa,” he says, “yeah . . . um . . . it’s about Christmas. I sort of have a problem with Christmas. Like a phobia, kind of. You know how some people are afraid of clowns or picket fences? I’m afraid of Christmas. It’s not serious. It’s not like I get terrified or anything, but Christmas movies do sort of freak me out.”

“I assume Elf is out of the question, then?” I ask.

“There’s always The Haunted Mansion,” I tell him.

“Hmmm. . . . Eddie Murphy, that haunted-house movie, yeah–the reviews have been so bad,” Novello says. “They say it’s not even as good as the Disneyland ride, and if a movie can’t be better than a ride, it must be a really bad movie. I’d really hate to have to see that. Hey, you know what I heard is really good? A little movie called In America.“

In America. Yep, there’s been good buzz on that one, a little small-budget job from Jim Sheridan, who directed My Left Foot and In the Name of the Father. It’s the story of an Irish immigrant family in the early ’80s, dealing with life in America while also grieving the death of their young son Frankie, who apparently fell down a flight of stairs back in Ireland. The movie’s been nominated for a boatload of Independent Spirit awards, and seems poised to become this year’s dark-horse Oscar favorite. Too bad it’s currently only playing in one small theater in San Francisco, about 50 miles from Novello’s home in Fairfax.

“So, how about Timeline?” I toss out, noting that the big budget time-travel adventure is playing pretty much everywhere. Unfortunately, I make the mistake of further noting that Timeline has been called the hokiest time-travel movie ever made.

“Wow, and that’s really saying something,” Novello replies. “The hokiest time-travel movie ever made. That’s, like, a cataclysmic thing, because time-travel movies are always, you know, pretty hokey.”

I take one more shot.

“Are you by any chance a closet Tupac Shakur fan?” I ask, having just spied the listing for the new Tupac Resurrection documentary.

“No, not really, probably not,” Novello says.

And that’s how Don Novello and I ended up in San Francisco, watching a funny-sad, Oscar-destined love story about a poor Irish couple with adorable children, the junkies and angry artists who share their decrepit tenement, and how they discover through the miraculous healing powers of E.T.: The Extra-Terrestrial (it’s hard to explain; take the drive, see the movie) that it’s time to set aside their dramatic attachment to suffering.

“It’s a sweet movie with great acting,” Novello says upon exiting the theater. “It’s going to get a lot of Oscar nominations, and one of the cute kids sings that song Desperado, so it could also maybe revive the career of the Eagles.”

“Irish Catholics are very good at suffering,” Novello points out a few minutes later, as we hole up in a nearby hotel bar to talk about the film. “I’m half Irish, so I can say that. Of course, all Catholics are pretty good at suffering,” he notes. “In Catholicism, suffering is good, almost. Jesus died on the cross, right? He suffered. So if Jesus suffered, then there must be something about suffering that’s pretty good.

“We believe that we will get rewarded for suffering. And then when you’re a kid and you’re sick, you get attention and sympathy from your parents. So we learn early on that suffering is bad, but suffering is also kind of good.”

“So,” I say, attempting to synthesize his point, “all religion springs from a childhood desire to be the center of the world?”

“Yeah,” he nods. “Or no. I don’t know. But anyway, these people are really into suffering and they do it really well.”

Don Novello, for the record, does a lot of things well.

As an actor, he’s appeared in several movies including Godfather III, in which he played Dominic Abbandando, the Mafia’s publicist. He’s released numerous Grammy-nominated comedy CDs, and written and produced shows for stage and TV (including the Broadway hit Gilda Radner Live from New York). He recently attempted a run at the governorship of California (he never actually made the ballot; some of his nomination signatures were ruled invalid), he’s been thrown out of the Vatican for impersonating a priest, and he even invented the canine baseball-retrieval unit for the Giant’s PacBell Park, in which water dogs are used to fetch homerun baseballs from the San Francisco Bay.

At the moment, he’s working on a photo book and accompanying film, all about the increasing omnipresence of cheap plastic lawn chairs (Possible title: Where Did They Come From and What Do They Want?). For all of Novello’s accomplishments, past and future, he is best known for those old, tasty, absurdist Father Guido Sarducci routines on SNL, and also for his bestselling Lazlo Toth books, The Lazlo Letters (1977), Citizen Lazlo (1983), and the brand-new From Bush to Bush.

Lazlo, one of Novello’s best satirical personifications, spent the last 30 years writing poorly spelled, outrageously strange letters to famous people and major corporations–“Dear Donald Rumsfelt, I had a dream I saw Osama Bin Laden . . . If I were you, I’d send a team of special forces into Mecca to check it out!” Lazlo frequently received letters in return, and they provide some of the books’ most frightening chuckles.

Novello’s favorite job to date, though, was providing the voice of Vinnie the explosives expert in Walt Disney’s animated film Atlantis. “I loved working on that more than anything I’ve worked on,” he says, adding that the film also produced the first and only action figure inspired by a Don Novello character. It makes one wonder why there have been no Father Guido Sarducci action figures.

“I don’t know why, I don’t know,” Novello says. “Actually, I don’t know of any priest action figures–no cardinals, no popes. OK, maybe one or two popes. If it was up to me, I’d have a whole line of Catholic cardinal action figures, 106 different cardinals, and all the popes, with, you know, ‘miracle gliding action’ or something. Someone gave me a little doll once, this little doll made in Hong Kong. It didn’t look like me; it was a little fat priest, but it had a cigarette in his hand and sunglasses on, so it was kinda close. But hey, that’s OK. I have the Vinnie action figure from Atlantis, and one action figure should be enough for anybody.

“I doubt we’ll be seeing any action figures for In America,” I remark.

“What? Like, an In America play set? Oh, I don’t think so,” Novello laughs. Ah, but now the wheels have started turning. After several seconds of thought, Novello responds, “I guess you could make a little plastic play set of the junkie apartment building, and another little Irish flashback set, with the big flight of stairs.”

“There’d have to be a little Frankie doll,” I contribute, “with ‘miracle tumbling action.'”

“Yeah, or you could have a little Frankie doll with wings,” Novello laughs. “Sounds like something Lazlo Toth would think up. Can you imagine Lazlo Toth writing to Mattel Toys or something. ‘Here’s a great idea! An Irish Immigrant play set!’

“I’d love to see the letter he’d get back for that one.”