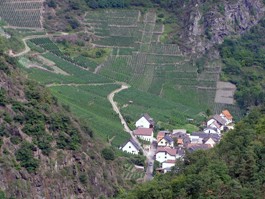 One day, a curious wine was found on the shelves of Trader Joe’s. In candid reference to its contents, the label featured a bunch of grapes sketched with a dated pastel palette, declaring simply that it was a 2005 Rheingau Pinot Noir, with the cryptic designation “Edition Maximilian.” The pale ruby contents of that humble bottle provide a tinted lens through which an unfamiliar world of German wine may first be glimpsed. German Pinot? Mein Gott.

Really. Although Riesling is the premier fuel of the German wine export machine, more than a third of the nation’s vineyards are planted in red wine grapes. According to the German Wine Institute, Germany is now the world’s third largest Pinot Noir producer, after France and the United States. For centuries, local markets sopped up the traditionally light, sweet red wines, and wine books mentioned them in afterthought, if at all. Now, changing tastes and a changing climate have prompted a serious reconsideration of dry red wine.

Was that unassuming flask in Trader Joe’s the first ripple of a tide of “Red Nun”? Not likely, unless Germans come up with a particularly irresistible critter label in the vein of Australia’s Little Penguin. (In fact one winery, Lingenfelder Estate, does produce a cannily marketed collection of everyday wines called “Vineyard Creatures,” featuring whimsical labels designed by Santa Rosa artist Chuck House.)

The big producers mainly pump out semisweet hock—Riesling, as well as simple white wines like Pinot Grigio and Müller-Thurgau. But a new generation of winemakers, influenced by international styles, have trebled the planting of red grapes and dramatically increased the quality of wines, yet several factors have kept these overseas. For one, although long cast as a northern, beer-drinking nation in contrast to southern Europe’s wine belt, Germany is the world’s fourth largest retail wine market, making domestic sales solid. Also, smaller wineries often practice a rustic system of distribution; making an annual nationwide tour in a wine-stocked van, they personally deliver orders.

Another hurdle is the widespread consumer assumption that German wines are always sweet. It’s one of those German stereotypes that’s not entirely a fiction. German pocket wine guides color-code new releases on a scale from dry to very sweet. Dry wine bottles are labeled “Trocken,” the German word for “dry,” a distinction that would be redundant in most New World markets—especially for reds.

It’s no surprise that France and Germany, with shifting borders over the centuries, share grape varieties. The story goes that Charlemagne brought Pinot Noir to Germany, where it’s called Spätburgunder—literally, “late Burgundy.” Telling of the cool, continental growing season, the grape that elsewhere is among the first harvested is named for its late-ripening. Growers struggle to get fully colored grapes under the slate-gray autumn skies—even though Spätburgunder has a brother, Frühburgunder (“early Burgundy”).

The typical German Pinot Noir is translucent and bright cherry red, and has a subtle bouquet—maybe roses, sometimes caramelized—sweet or sour cherry fruit, and light tannin. Hiram Simon, owner of Oakland’s Vienna Wine Company, says that what he likes best is its “clarity of its expression and softness of texture. Unlike most serious Burgundy, a good Spätburgunder is approachable in its youth, but retains an ability to age well.”

That bottle from Trader Joe’s could very well warn off some Pinot fans from the Rhenish version for good, though the pale wine has a pleasant enough aroma of strawberry jam, candy and molasses and a light hint of bacon. Semisweet and the pale hue of a dawning horizon, it might make a lively companion to breakfast ham and waffles; given a chance, it does grow a certain charm.

Counter to the maxim of red wines in southerly climes, one of Germany’s traditional red wine regions is in the north. The scenic Ahr Valley is a favored destination for day-trippers from Köln, as well as formidable armies of walking stick-armed retirees, and roadside stands make it easy for motorists to sample the light wines of the area. The narrow valley extends due east, lending the steep, painstakingly hand-farmed vineyards their crucial southern exposure.

Riesling reigns along the castle-studded banks of the Mittelrhein, while sharing some renown with Spätburgunder in areas of the Rheingau. In the rolling farmland of Rheinhessen, large quantities of highly processed supermarket wine are churned out by wine factories. Akin to the Lodi of Germany, it’s the original home of Liebfraumilch, although mom-and-pop cellars tucked away in the region’s villages make an untold number of small-batch reds.

In the Pfalz, Rainer Karl Lingenfelder makes quality, oak-aged Spätburgunder. Small barrels are still a big deal in Germany, such that premium bottles are often labeled to emphasize “barrique” aging. The Vienna Wine Company’s Simon claims that a 1990 Lingenfelder Spätburgunder he tasted “would have held its own with many Burgundies of the same vintage.” Lingenfelder, although family-run for centuries, stands out from the pack with its contemporary “Vineyard Creatures” brand. It’s mainly found in U.K. markets like Oddbins.

Baden is the warmest, most southerly wine region, dominated by the Kaiserstuhl, a hilly area in the Rhine Valley that was radically terraced during a 20th-century “rationalization” program to make hillsides easier to work, making it look like a gargantuan Mesoamerican pyramid. Here, Spätburgunder stars, and names like Salway, Heger and Zimmerlin have been leading the way in quality. The typical wine is still light-colored, if also packed with pleasant flavors of kirsch and plum, with an alcohol content as much as 14 percent. In some cases, that might be because it’s legal here to add sugar before fermentation (strictly verboten in California), resulting in New World&–style alcohol contents.

But is it only climate that’s at work? German vineyards produce what appear to be heroic yields. The German Wine Institute’s 2008 vintage report states that Baden growers brought in an average of 90 hectoliters per hectare, equaling nearly seven tons of grapes per acre, twice what’s typical in the North Coast. That’s actually on the quality side; yields can be double for the real plonk. California winegrowers might find it hard to sympathize with people who add sugar because they couldn’t ripen their crop while hanging seven tons of fruit in a continental climate, but then again, imagine enduring an August that rains nearly every day.

This brings us to an even darker side to the German wine industry. Though not as popular as Spätburgunder, traditional German reds like Lemberger, Saint Laurent and Portugieser ripen better and gain more color in the climate. Santa Rosa’s Traverso’s market recently selected a 2006 Lemberger from Württemberg for its eclectic wine club. It’s a medium-bodied, bone-dry wine with an initial aroma of a cool grotto, with grape jelly on the palate, that finishes with abrupt German efficiency.

Perhaps the most promising, richly colored red is, of course, the result of German Wissenschaft. The hybrid grape Dornfelder was developed in 1956 specifically to fulfill the function of ripening and coloring well in the short Rhenish season. Often made off-dry, it can be fruity, full-bodied wine—it’s not hard to imagine Dornfelder as the YellowTail of Germany. Alas, it’s also the least likely to show up on U.S. shelves.

But some American wineries have brought Dornfelder here, out of curiosity and a nod to family heritage. In Lodi, Mokelumne Glen Vineyards makes both Dornfelder and Lemberger. Huber Vineyards in the Santa Rita Hills makes a 2005 Dornfelder that’s opaque crimson and nearly stains the glass. After a few minutes of air, it reveals aromas of cedar and plum jam with flavors of sweet conserve and red vines. Nominally dry yet a lip-smacking balance of tart and sweet, it’s an unusual, viscous wine with personality.

If climate change, potentially a more powerful hand in the wine market than any other, warms the Rhine enough to predictably ripen German wines like that—who knows, we may ultimately watch the shelves in vain for a flood of critter-labeled Spätburgunder. But who could resist a $3.99 bottle of “Little Fledermaus”?