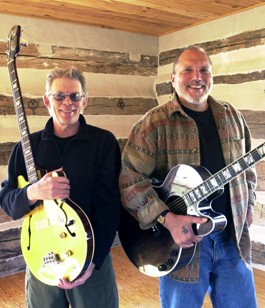 That’s how long Jorma Kaukonen and Jack Casady have been making music together, a partnership that stretches back past their time together in the Jefferson Airplane to their high school years in Washington, D.C.

“I remember it like it was yesterday,” Kaukonen says of their very first encounter, which took place at Casady’s home. Kaukonen was friends first with Jack’s older brother, “but then, as Jack was already taking music lessons, we realized we had more in common and we just started hanging out. And before you know it, half a century’s gone around.”

The biggest part of those five decades has been devoted to playing together as Hot Tuna, the blues-oriented, after-hours side project they launched while the Airplane was still soaring. Throughout that history, the band has shifted between electric and acoustic configurations; they’ll perform without amps at the Mystic on Sept. 24, which Kaukonen concedes is his preferred format.

“Electric music is very seductive. It’s a lot of fun to play and I enjoy that,” he says. “But I don’t think I love it with the same basic intensity that I love acoustic music. I’ve never loved my electric guitars the way I love my acoustic guitars. Not that I disrespect them or don’t like them, but I never had a problem with selling them or trading them. So yeah, I think the acoustic thing is closer to my heart.”

This view is entirely consistent with his early interest in the finger-picking style of country blues developed by the Rev. Gary Davis, an influence that can still be heard in Kaukonen’s recent series of solo recordings, which began with 2003’s Grammy-winning Blue Country Heart. A newly completed solo disc, set for release next spring, has provided fresh material to be “co-opted for Hot Tuna” set lists, he jokes.

While the band—which now includes mandolin ace Barry Mitterhoff as a member—still gigs regularly, a healthy slice of Kaukonen’s time is also devoted to his Fur Peace Ranch Guitar Camp, a homespun enterprise housed in the rustic rolling Appalachian foothills of southeastern Ohio.

“We’re into our 11th year now,” he says, a note of satisfaction audible in his voice. “I call it a guitar camp because I’m a guitar player, but we have all sorts of instruments”—and a revolving list of Hall of Fame instructors that also includes David Bromberg, Stephan Grossman, Larry Coryell, Rory Block, G. E. Smith, Warren Haynes and many other well-known figures.

“Our weekends are Friday morning through Monday morning and people come in for those weekends, and all you gotta do is play music and talk about gear and forget about the rest of the world,” Kaukonen chuckles.

For some, it’s a fantasy camp with tuning pegs, but there are also times when the conversation turns to the business of making music. “My take is, you just gotta love it,” Kaukonen says. “You can’t go into the music business prepared to get rich, because that’s probably not going to happen—but it might, you never know.”

Reflecting on his own musical history, Kaukonen still seems surprised by it all. “Oh man, I owe such a huge debt of gratitude to the Airplane, my various pals in the Airplane,” he says. “I wasn’t a kid when I joined the Airplane, I’d just graduated from college, but I went from being really nobody to being somebody in the blink of an eye, as did we all. I mean, how often does that happen? And as a result of my being in it, I’ve been a pretty successful folk musician for the rest of my life.

“It was just more exciting than words can express.”

While the Airplane represents the distant past, Hot Tuna have managed to stay fresh. “Jack lives in California and l live in Ohio, but every time we get together, we bring a little something new to the mix. Now, I’ll be the first to admit that maybe we’re the only people who can hear when we do new stuff,” Kaukonen jokes, “but I feel like we’re always throwing something new, in some small way, into even the oldest songs.”

So what, then, is the key to this loose but lasting partnership? “Jack and I are very different people, but we respect each other, we’ve never had an argument,” Kaukonen says. “We disagree about a lot of stuff, but we can always agree on the important things.