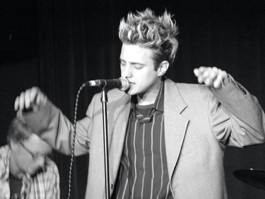 The Spindles tackle our favorite messiah

I spent entire parts of August avoiding talking with my mother about the song “Sticky Sweet Jesus,” a moving new track by Santa Rosa’s NORBAY-nominated indie rockers the Spindles. “What does that song mean?” she’d keep asking me, and I’d keep answering, “I’m still trying to figure it out.” Sure, it was partly an excuse for not wanting to offend her with a heated debate about my sense that the song wrestles with the shared failures of salvation and pleasure. And yet I still feel a genuine, thrilling compulsion to know what the heck “Sticky Sweet Jesus” means after all.

Coalmine Spindle, frontman and songwriter for the Spindles, tells me that many listeners have connected to the song; musicians in particular dig it, even though it’s a simple repetitive pop tune. “I definitely didn’t write it as an antireligious rally cry,” says Coalmine, who attended Catholic school and has three aunts who are nuns. Instead, he says, “it really does point to some inner conflict I have about the guy—the revulsion of who has taken Jesus as their flag, i.e. the church establishment, yet head-to-head with that is an attraction to the first and most committed rebel, who literally gave life and limb to challenge the thoughts and schemas of his peers.” An internal spiritual tug of war? “Maybe that’s what people identify with,” he suggests.

“Sticky Sweet Jesus” is the opening cut on the Spindles’ soon-to-be-released second full-length disc Present Herman Berlin (advance tracks can be heard on the band’s MySpace page). The band’s melodic, wistful folk-rock is sharper and punchier than on earlier work, with jumpy pop tales like “Pen and Paper,” breezy country-rockers like “Something Serious” and Beatles-like dramatic build-ups like “Overhead Projector.” The final cut, “Two Guns (And the Ashes of a Dead Man),” subtly returns to family history as an awkward spiritual source for romantic discomfort.

Present Herman Berlin features music recorded last year, but “it’s a solid picture of who the Spindles were for a couple of years—lots of instruments, really using our resources of friends with amazing talent,” says Coalmine, citing the presence of notable guests like Amber Lee on accordion, Muir Houghton on cello and banjo, Achilles Poloynis on trombone and original drummer Dan “Syd” Lindley on drums. The band’s core (Jamie Voss on bass, Henry Nagle on guitar and pedal steel, Sari Flowers on vocals and Jonathan Hughes on drums) have already begun recording more new material, and Coalmine reports that “the most current stuff is a little edgier, more streamlined and frothing with confidence.”

The Spindles appear with a smattering of local bands at the Handcar Regatta on Sunday, Sept. 28, at Santa Rosa’s Railroad Square. The event, billed as “an exposition of mechanical and artistic wonders,” runs from 9:30am to 6pm; music performances begin at 11:30am. Free. For more information, visit [ http://www.handcar-regatta.com/ ]www.handcar-regatta.com.