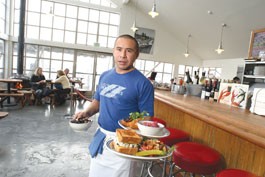 Dipping a toe in the farmed-fish debate

That’s the gospel, anyway, of Kenny Belov, co-owner and manager of Sausalito’s Fish, one of the most staunchly sustainable-seafood restaurants in the Bay Area. To promote awareness of wild salmon’s current plight and of the ways in which aquaculture threatens wild salmon populations, Belov and five other restaurants on the West Coast–including Flea Street Cafe in Menlo Park, the Basin in Saratoga, Passionfish in Monterey, Baja Taqueria in Piedmont and Mina in San Francisco–have made a pact: Each has agreed to never serve farmed salmon again.

But plenty of other restaurants still offer the farmed product, and Belov, a part-time commercial fisherman, worries that consumers, now faced with the absence of affordable wild salmon, will increasingly buy and eat the farmed alternative to sate their appetites. Powerful evidence links salmon farming to the decline of wild runs in Ireland, Scotland and Norway. In British Columbia, too, where all five species of Pacific salmon are still relatively healthy, some runs have declined dramatically following the establishment of salmon farms, and there is concern that many Canadian runs will vanish within a decade.

Farmed salmon are raised in often putrid conditions, packed like sardines into open-ocean pens where sea lice, a perfectly natural parasite, thrive in unnaturally high numbers. Wild salmon that pass near the pens are extremely vulnerable to infestation, especially inch-long juvenile pink and chum salmon, which exit river mouths to begin their ocean lives almost immediately after hatching, when they weigh less than a gram. Such small fish are regularly observed dead or dying near farming facilities, covered with the mites.

Trevor Swerdfager, aquaculture manager with the Canadian Department of Fisheries and Oceans, denies a direct cause-and-effect relationship between salmon farms and vanishing wild runs. Bias against salmon farming is based on “urban myths,” he says, and sea lice are a natural phenomenon in the ocean, not a problem associated with ocean farming. Besides, says Swerdfager, salmon farms are only established after full review and consideration of where wild salmon swim.

Nonsense, says Catherine Stewart, campaign manager with the Living Oceans Society in B.C. While laws do keep salmon farms away from river mouths, the facilities frequently operate in the direct paths of migrating salmon.

“There are masses of overwhelming evidence from scientists all over the global community that farms produce lice that kill wild salmon,” Stewart charges. “There are one or two guys paid by the industry to say it’s not true.”

Cory Peet of the Monterey Bay Aquarium’s Seafood Watch Program, which prints those color-coded cards that advise consumers on seafood purchases, says the correlation between farmed salmon and wild salmon declines is obvious, though he admits that proving anything that occurs under the surface is difficult, if not impossible.

“One of the things the [aquaculture] industry depends on is saying that the science must prove there’s a risk from the sea lice,” Peet says. “That’s not possible. There’s no way to watch as a sea lice moves from a farmed fish and attaches to a wild smolt.”

But sea lice can only reproduce while clinging to salmon. The copepods may periodically take rides on lingcod and other bottom fish, but high densities of lice can only mean the animals are thriving on a nearby salmon hotbed.

The Canadian government, known to be sympathetic toward the salmon farming industry, takes its own science from select sources. It keeps close watch over six “indicator” rivers to ascertain that farms are not harming wild runs. One such river, the Glendale, features an artificial hatchery, and the highly boosted runs recorded year after year on this watershed are merged with less optimistic data, ultimately producing numbers that suggest there is no problem. Thus, industry life goes on as profitably as ever, and a whopping 85 percent of farmed Canadian salmon drops like candy from a piñata into the mouths of Americans.

“Change has to come from consumers,” Stewart says.

In California, salmon farming is currently illegal, but Mike Hudson, an on-hiatus salmon fisherman from Berkeley, believes that should consumption of farmed salmon skyrocket now that the wild is unavailable, it could be lights out and nails in the coffin for the already struggling Sacramento Chinook. Even if farming does not come to California, Hudson explains, the availability of farmed fish would preclude any need to protect the streams where our own salmon still spawn.

Hope for wild salmon everywhere lies largely with the chefs who feed us, says Fish’s Belov. “Chefs have a responsibility. When a customer comes in and asks, ‘Where’s my salmon?’ it’s the chef’s job to explain why there is no salmon now, but that there are alternatives.”

That’s what Belov does. At Fish, he offers local line-caught halibut, black cod, rockfish and albacore, some of which he catches himself and offloads directly at the rear of the restaurant.

Casson Trenor, development director of Fishwise, a nonprofit seafood-sustainability consultancy, says that the restaurant industry is driving many species into dire straits–even toward extinction. Trenor personally consults for Tataki Sushi and Sake Bar in San Francisco, a rare example of a 100 percent environmentally ethical sushi restaurant. “At Tataki, we’re interested in showing people new things and putting new items on the menu,” he says.

Tataki serves no bluefin, no hamachi and no farmed salmon–big profit makers for most sushi bars. But many chefs and restaurateurs are not so conscientious, says Trenor. They serve obvious no-no’s simply to compete with other restaurants.

“Some chefs and retailers are holding people back. They tell people that this or that farmed salmon is a sustainable one, and people believe it and buy it.”

Loch Duart, a farm in Scotland, receives much praise as a “sustainable” operation, and numerous restaurants nationwide embrace and endorse its product, including the Bay Area’s Chez Panisse, French Laundry and Poggio. The farm’s advocates point out that Loch Duart has taken important steps forward. It has minimized petrochemicals in pellet feed, reduced stock density and is rearing sea urchins onsite to absorb waste matter from the fish.

Yet Seafood Watch’s Peet believes Loch Duart is still not a responsible alternative to wild fish. “We have no data to bring their production off our red list,” he says. “They may be a different shade of red, but they’re still red.”

The current Sacramento Delta salmon crisis has nothing directly to do with aquaculture. It is almost certainly due to poor freshwater management. Hudson points to an abrupt increase in water diversions from the delta that began three years ago as the cause of the Chinook crash. That, says Hudson, tipped the ecosystem over the brink.

But recovery could come just as quickly.

“It could be so easy to bring back and maintain these runs, because salmon need just two things: abundant free-flowing water and gravel,” says Laura Anderson, owner of Newport’s Local Ocean Seafoods, another restaurant that has taken the no-farmed-salmon pledge.

In the meantime, says Belov, people must not view the salmon season closure as a solution.

“Stopping the fishing is the easiest fix for the public to see that something is being done, but what the salmon need to return is fresh water.”

Fortunately, salmon are extremely fast-growing and resilient, as fish go, and history shows that simple restoration of habitat in the rivers and streams where they spawn could bring the fish back within several years. In 1994, the winter run of Chinook salmon hit a heart-stopping low of 186 individual fish. Authorities took action and cleaned up the spawning habitat, poisoned at the time by a leaking mine, and within several years the run exploded to 8,000 fish.

Belov hopes to recruit dozens more restaurants in the next year to take the farmed salmon pledge and bring awareness to diners, but recruitment has been slow. “I believe most chefs are not doing what they could,” he says. “They’re more concerned with their appearances and what their reviews are.”

Belov’s aim as a restaurateur is to provide an honest, fresh meal from an honest source. Aesthetic pleasantries and service conventions come last.

“There’s no service here. I’m sorry. You have to grab your own silverware and you get a picnic table. If you don’t like that, sorry, but I’d rather spend my money on the fishermen than on my linens.”

But how will salmon fishermen survive without the Chinook? Many are dabbling already in other fisheries, but prospects are grim for making a living beyond the barrel-bodied, silver-skinned fish that they know so well.

“There are other fish, like halibut or black cod, but we’re not good at catching those,” Hudson says. “Whatever fishery you might be in, it takes a long time to get good at it. We’re salmon fishermen. Everyone tells us, ‘Hey, just go put on some different hooks and catch some other fish.'”

But even if Hudson and the fleet did bring in healthy hauls of the finest, most sustainable products our waters still have to offer, what difference would it make if the fish we buy comes from a farm?